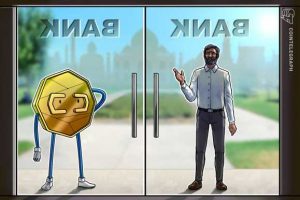 Cryptocurrency traders and investors in India are among the latest casualties in an increasing trend of personal account closures by global banking operations.

India’s parliament is currently contemplating a nation-wide crypto ban which local industry critics, such as former Coinbase CTO Balaji Srinivasan have compared to “banning the internet for five years.”

The Economic Times reports that customers of private banks in India, such as HDFC, HSBC and Citi, have been receiving notices this year asking them to clarify crypto-related transactions, often requiring them to visit their local bank branch in person. If such clarification is not received, accounts are at risk of being suspended or seized. One letter to an affected customer states:

“To comply with the regulatory guidelines, banks are advised to exercisedue diligence by closely examining the transactions carried out in the account on an ongoing basis to caution users, holders and traders of virtual currencies including Bitcoins regarding risks.”

In 2020, India’s Supreme Court reversed an order from the Reserve Bank of India in which banks were asked to discontinue provision of services to cryptocurrency traders.

India’s parliament is expected to enact a new bill that will further restrict the financial activities of traders, and prominent members of the Indian cryptocurrency community have spoken up against it. Sathvik Vishwanath, CEO of India-based exchange Unocoin, believes that a move in the opposite direction is needed to encourage growth of the fintech space in his country. “With crypto by her side,” he said, “the country can bank the massive unbanked population.”

Banks are also preemptively closing customer accounts deemed to be associated with funds moving in or out of cryptocurrency exchanges in a number of countries.

On Feb. 5, the Central Bank of Nigeria prohibited financial institutions operating in the country from “facilitating payments for cryptocurrency exchanges,” leading to the immediate closure of bank accounts associated with exchanges and the individuals behind them.

In the U.K., HSBC recently stopped accepting transfers from cryptocurrency exchanges altogether. Lloyds Bank, a British retail and commercial bank, has also been ramping up efforts to dissociate themselves with cryptocurrency traders, as experienced by podcaster Peter McCormack in a Feb. 22 tweet. However that may be a self inflicted wound. 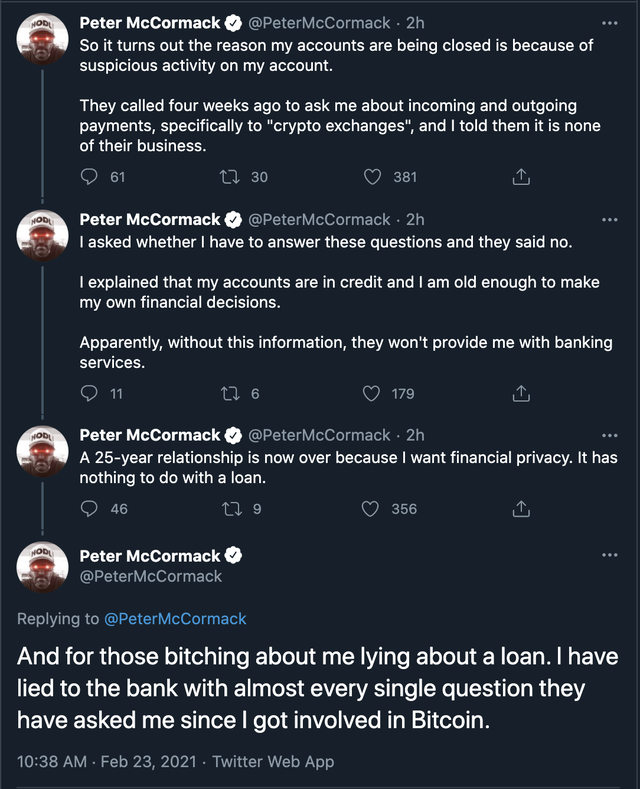 A long-time Bitcoin investor based in the U.K., who wishes to remain anonymous, told Cointelegraph that major banks across Europe are increasingly distancing themselves from crypto traders. He said that new accounts are being turned away from banks on the basis of their involvement with crypto.

“I was looking to openly approach a new bank and be up front about it,” he says. “But I met a brick wall.” The investor claims to have put “six figure amounts” through HSBC “with no issues,” but that legacy accounts are being treated differently than newcomers.