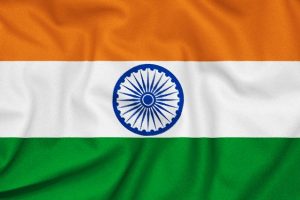 Scammers took control of Indian Prime Minister Narendra Modi’s Twitter account. The account has over 73 million followers and it promoted a very known cryptocurrency scam that affected thousands of users over the last few years in the crypto community. Scammers declared Bitcoin legal tender and invited users to participate in the giveaway by entering a malicious link.

The Twitter account of the Prime Minister of India Narendra Modi was hacked. A group of Bitcoin scammers wrote through the Prime Minister account that India officially adopted Bitcoin as legal tender. The tweet also said that the government purchased 500 BTC and that it was distributing them to all country residents.

“India has officially adopted Bitcoin as legal tender. The government has officially bought 500 BTC and is distributing them to all residents of the country. The future has come today!”

The official Twitter account of the Indian Prime Minister was then used to inform that Narendra Modi’s account was briefly compromised. They have also written that the account had been immediately secured after the issue. 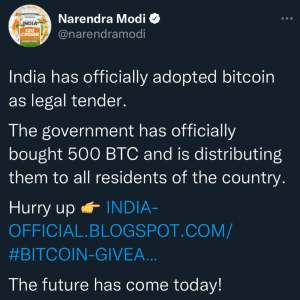 Users had to sign up using a link shared by the official Twitter account of the Indian Prime Minister if they wanted to receive their share of Bitcoin. This is a very common scam that became very popular over the last few years all over the world. Despite the fact that Twitter is now more secure than it was before, these things could still happen.

Let’s not forget that some years ago recognized Twitter accounts were created to impersonate other famous people. Once they were able to reach a large number of users, they promoted cryptocurrency-related scams that promised to multiply users’ digital currencies. Of course, everything was fake, but thousands of individuals fell to these scams.

Another problem that crypto Twitter encountered was related to real accounts getting hacked, such as the one of Narendra Modi. However, this was addressed by Twitter and things are now calmer despite the recent issue that affected India’s Prime Minister.

India has been trying to regulate and control cryptocurrencies over the last few years. There have been several proposals that aimed at restricting the use of virtual currencies while others pushed for wider crypto adoption in the country. The truth is that there are no clear regulations in India and the country seems not to have a clear idea of where to move in the coming years in terms of digital currency regulations.