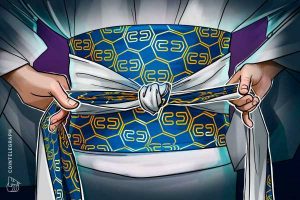 Proposed by Ethereum creator Vitalik Buterin, SBTs refer to digital identity tokens that represent the characteristics or reputation of a person or entity, or a “soul.” Such tokens are non-transferable and are designed for the decentralized society and Web3.

SMBC officially announced on Dec. 8 an initiative focused on the practical use of SBTs in partnership with the digital asset firm HashPort.

The companies plan to conduct research on SBTs to find out their practical uses for communities, jobs, knowledge sharing services and decentralized autonomous organizations (DAOs).

According to SMBC, the development could specifically be useful for individuals increasingly assuming diverse roles and personalities within society. The company stated:

“It is expected in this new society that each individual will be able to control which personality he/she displays in each community in which he/she participates. SBTs satisfy these new social needs through the use of multiple ‘souls’.”

One of the practical uses of an SBT could be a situation where a user has a role of a working adult and another role of a music fan. “If this user wants to prove his/her skills and work history when changing jobs, he/she can simultaneously prove his/her identity and his/her career information associated with them by allowing his/her employer to reference the SBTs,” SMBC said.

The company also noted that the partnership with HashPort can be put to practical use in the future and is a meaningful initiative to drive the growth of the Web3 economy in Japan.

“The two parties will also consider undertaking content business associated with NFTs and developing infrastructure for the Web3 economic zone to encourage the spread of the token business both in Japan and overseas,” the announcement notes.

A major financial institution in Japan, SMBC is part of Mitsui Group, which is one of the largest corporate groups in the world. Various companies within Mitsui have been actively exploring blockchain and cryptocurrency tools in recent years.