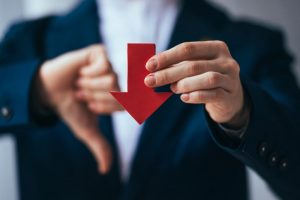 Just yesterday, Live Bitcoin News put out an article discussing all the analysts out there who seem to think that bitcoin is getting ready for a big comeback and that the currency could potentially overtake USD at some point. Billionaire investor and “bond king” Jeff Gundlach is not one of those people.

Jeff Gundlach Is Not Confident in BTC

In a recent interview, Gundlach says that bitcoin is likely to fall another 27 percent, thereby making 2021 the new 2018 in official terms, while he also thinks that fiat currencies such as the U.S. dollar are in for a world of hurt. Discussing a recent bitcoin chart that he came across, Gundlach warned things are not looking good for the world’s number one digital currency by market cap. He states:

The chart on bitcoin looks pretty scary… I have a feeling you are going to be able to buy it below $23,000 again. Bitcoin has really lost its steam.

Over the past year or so, bitcoin has taken on a new form for many traders. Initially, it was only seen as a speculative asset – one that given the right circumstances, could potentially make a trader rich very quickly. However, during the time of the coronavirus pandemic, bitcoin has been viewed as a currency that could possibly make one’s wealth stable during times of economic strife.

It is seen as a hedge tool among many, though Gundlach does not agree. He says:

I think it is only a trading vehicle. I have never been long on bitcoin, personally. I have never been short on bitcoin. It is just not for me. I do not have that kind of risk tolerance in my DNA where I need to get worried to pull up the quote every day to see if it is down 20 percent, but I would not own bitcoin presently. I think you had an opportunity to buy it at a cheaper level.

Aside from bitcoin, Gundlach is not feeling confident when it comes to the U.S. dollar. He says that inflation is getting to be a real problem, and that the government is printing money like there is no tomorrow. He claims:

I do not want to be overly dramatic, but I think the dollar… I will use the word ‘doomed’ in the long term. In the short term, the dynamics have been and will continue to be in place for the dollar to be marginally or moderately stronger. It is getting difficult for the Fed to talk about this inflation situation as being temporary or ‘transitory,’ as they like to say… Import prices came up today up 11 percent. We all know the CPI came up with 5.4. I mean, these are numbers that remind me of the 1970s. Inflation right now is not decelerating. It is accelerating.