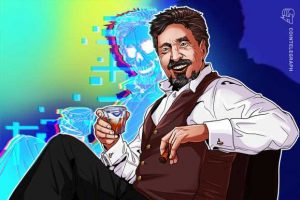 Often a figure of ridicule within the crypto community thanks to his outlandish predictions as well as being a larger-than-life personality, John McAfee has ceased to be in the spotlight of the crypto community. However, following his alleged “suicide” that occurred in a Spanish prison cell on June 23, tributes have been flowing en masse for the tech savant, who was also an early proponent of digital currencies — especially Bitcoin (BTC) and later Monero (XMR).

McAfee had been in exile for the last few years of his life. In this regard, it has been widely reported that the creator of McAfee Antivirus had been on the run from the United States authorities for evading his tax liabilities, which were touted to be worth over $4 million. In all, he had been named in a total of 10 federal indictments and was ordered to be extradited to the U.S. mere hours before the news of his suicide surfaced.

After being apprehended by local authorities at Barcelona airport last year, McAfee seemed to have acclimatized quite well to his prison surroundings. “I have friends. The food is good. All is well” he tweeted in October 2020. This, in the eyes of former National Security Agency operative and whistleblower Edward Snowden, seemed to suggest that the U.S. legal system was so fractured that even native-born defendants “would rather die in a prison cell abroad” than become subject to such an unfair system.

Did McAfee predict his untimely demise?

One of the strangest aspects of this entire development is that over the course of the last few years, McAfee repeatedly emphasized the fact that American officials had been sending him subtle yet fairly explicit messages suggesting that his time here was nearly done and that he was going to be “suicided” soon.

On the subject, one of his tweets alarmingly read: “U.S. officials saying, in effect: ‘We’re coming for you, McAfee! We’re going to kill yourself.’ I got a tattoo today just in case. If I suicide myself, I didn’t. I was whackd. Check my right arm.”

Not only that, in one of his statements, he made it clear that in case he was ever found hanging in his cell, it would be through no fault of his own but rather an attempt “a la Epstein” to silence him. McAfee claimed that he had a lot of inside dirt on many of the world’s elites, government organizations, etc., even going as far as saying that he was going to start “naming names” — including a top-ranked Central Intelligence Agency employee who had directly been involved in a lot of sketchy business.

Furthermore, in an interview given by McAfee’s widow, Janice, on June 25, she claimed that the British-American tycoon was not even the least bit “suicidal” when she last spoke to him, which was apparently just a few hours before his body was discovered in his cell.

And while authorities claim that there is nothing suspicious about the tech titan’s death, following the aforementioned revelations, people all over social media have been saying that there might have been “foul play” involved.

Lastly, just a day before his untimely death, Spain’s National Court announced that it had come to an agreement with U.S. authorities regarding McAfee’s extradition — with the final decision still pending and subject to additional judicial inquiry. In fact, McAfee and his legal counsel had already devised a plan of action to appeal the decision, further suggesting that the pressure of the extradition alone may have not caused McAfee to resort to suicide.

Shortly after news of his demise started doing rounds online, calls for McAfee’s death being planned started to gain a lot of traction. Firstly, the flames were ignited when McAfee’s official Instagram account shared an image of the letter “Q,” supposedly shortly after his death.

The “Q” in question here is in direct reference to the QAnon conspiracy theory that suggests that a group of elite pedophiles run a global child sex trafficking ring and have a direct say in how the American administration runs. What’s more, the theory also suggests that this cabal of high-ranked elites can manipulate the global economy thanks to their control of the fractional banking system.

As expected, as a result of the post, a large number of QAnon influencers on Telegram started sharing images claiming that McAfee was just another sacrificial pawn — much like Jeffery Epstein — and had to be “suicided” due to the secrets he possessed regarding those in power across the globe.

Killswitch engaged, but where is all the information?

In a tweet from late 2019, McAfee noted in no uncertain terms that if he were to ever “disappear” mysteriously, he would release some 31-plus terabytes of incriminating data (related to various government officials as well as those in positions of power) to the media. However, even as people all over the world continue to wait quite eagerly for this information, no such data seems to have been made available so far.

In fact, he even allegedly wrote in a message that he has a stash of sensitive data that is backed up in a number of hard drives and has been stored in his condo near 88th Street, north of Miami Beach. That said, a quick look at McAfee’s feed shows no such post, suggesting that the message may have been tweeted and later deleted or could have been a total figment of imagination, to begin with.

Over the last couple of years, McAfee had continued to associate himself with many conspiracies, as is made evident by the fact that in one of his posts, he depicted himself standing in front of Jeffrey Epstein, the multi-millionaire and convicted sex offender, who was also the victim of an alleged “forced suicide.”

Lastly, the tech entrepreneur had recently even launched a cryptocurrency called Pizza that advertised itself with an image of Hillary Clinton eating pizza. The asset seemed to be a direct reference to the Pizzagate conspiracy theory, which garnered a lot of traction a couple of years ago after the former Secretary of State’s emails were leaked online through Wikileaks.

Will the story of John McAfee live on?

Born in 1945 to an American father who was serving in the army and stationed in the United Kingdom at the time, McAfee received his Ph.D. in mathematics before making his way to Silicon Valley in the late-1970s. Within a decade and a half, he was not only working for Lockheed but also spending a substantial portion of his personal time looking at software solutions that could help combat the growing problem of computer viruses.

In the early 90s, John established McAfee Associates from the comfort of his home and started devising novel solutions to help combat various digital threats that were prevalent at the time. As a result, before the dawn of the new millennium, the company was already raking in close to $5 million a year.

Following his passing, the tributes have been flowing in from all sides. For example, Bitcoin influencer and podcaster Anthony Pompliano shared a post remembering McAfee as a “kind, funny, and incredibly intelligent,” individual. Similarly, Cardano founder Charles Hoskinson, too, spoke highly of McAfee’s contributions to the domain of computer sciences, calling the man “one of the most enigmatic and interesting people in the cryptocurrency space and the history of computing.”

While there will always be people who either believe or disbelieve the narrative that the U.S. government had a role to play in McAfee’s death, the fact of the matter is that he did claim that he had a lot of dirt on the global elites. Now, whether or not any of this so-called classified information makes its way to the internet remains to be seen.

That, however, does not take away from the fact that McAfee was not only a true pioneer in the field of digital security but also a visionary who could foresee the rise of cryptocurrencies even when the space was in its infancy.

Conspiracies aside, the tech pioneer will be sorely missed by many.