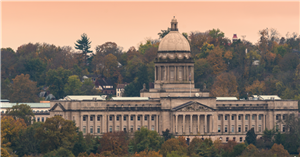 Two Kentucky lawmakers have called upon the commonwealth to offer tax breaks to cryptocurrency miners seeking to tap into the energy rich region.