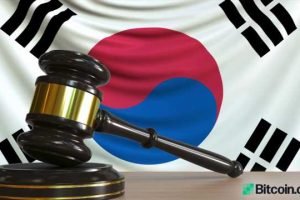 A class action lawsuit has been filed in South Korea accusing cryptocurrency exchange V Global of defrauding investors. The police reportedly estimate that 69,000 people have invested with the crypto exchange and the damage amounts to 3.8 trillion won.

A class action lawsuit has been filed by 130 victims. Daegeon, a law firm representing the victims, said: “The 130 victims decided to file a joint complaint with the Gyeonggi Southern Police Agency against three executives and employees, including the CEO of V Global, a cryptocurrency exchange, on June 4.” According to local media:

The police estimate that 69,000 victims have invested with V Global and the damage amounts to 3.8 trillion won.

Han Sang-joon, a lawyer at Daegeon, explained that there were “actually 20,000 to 30,000 victims who did not get their money back, and 600 billion to 1 trillion won in money that was not returned.” However, he emphasized that “It could be bigger.” In April, V Global filed a complaint against Daegeon for defamation.

V Global held briefing sessions across the country from August last year until recently, promising investors that if they open an account with the crypto exchange and deposit at least 6 million won into the account, they “will get back 18 million won, three times the investment in a short period of time.”

The victims also said that V Global divided investors into 7 levels and promised to pay them each time they brought in a new member. Investors soon realized that the crypto exchange operated a Ponzi scheme and the investment of existing members is returned with the money from new members. V Global has also issued its own native token.

Gyeonggi Nambu Police Agency suspected illegal activities at V Global earlier this year and launched an investigation. The police are reportedly expanding their investigation nationwide since the company held investment briefing sessions and recruited investors from all over the country.

Last month, the police raided the cryptocurrency exchange and V Global forfeited 240 billion won. Nam Gu-jun, head of the National Investigation Headquarters, said, “We have booked about 60 suspects so far, and we are analyzing the confiscated items before indictment.”