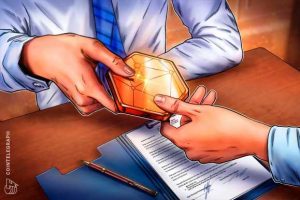 Amid the sharp pullback across Bitcoin (BTC) and the wider crypto market this week, the Luna Foundation Guard (LFG) is set to deploy $1.5 billion worth of capital to “help protect” Terra USD’s (UST) peg to the United States dollar.

The Singapore-based nonprofit LFG is part of the Terra ecosystem and is tasked with collateralizing the network’s algorithmic stablecoin UST to keep its USD peg intact while also managing the network’s reserves.

While details are sparse at this stage, the LFG outlined on Twitter earlier today that it will first loan out $750 million worth of BTC to over-the-counter (OTC) trading firms to manage and trade the capital.

Following on from this, once the market has stabilized, the LFG will obtain a 750 million UST loan — most likely from Terraform Labs to re-balance its reserves.

The LFG noted that the council voted to execute the plan after observing “significant” market volatility across BTC, UST and Terra (LUNA) over the past several days.

Providing further explanation on the move, Terraform Labs founder Do Kwon emphasized on Twitter that “LFG is not trying to exit its Bitcoin position” and is ultimately deploying the capital in the short term to strengthen UST in the short term will upping its BTC holdings long term:

“While buys and sells of UST are not meaningfully directional now, we felt it was valuable to have capital ready to be deployed in the current market. As markets recover, we plan to have the loan redeemed to us in BTC, increasing the size of our total reserves.”

As the LFG’s $2.91 billion reserves are primarily backed by BTC by 91%, or $2.7 billion at the time of writing, the declining price of assets is forcing the entity to readjust its balance sheet to maintain UST’s peg. At the time of writing, BTC is down 12.7% over the past seven days to sit at roughly $33,600, while UST is slightly off its peg at $0.99.

Terra’s native asset LUNA, which also plays a part in maintaining UST’s peg via its burning and minting mechanism, has suffered significantly over the past week as well, dropping a hefty 24.5% to sit at $62.15.