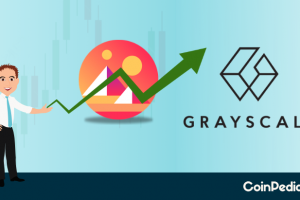 Grayscale Trust, a popular hedge fund which holds the highest share of Bitcoin and many other altcoin trusts, might be considering adding up other assets. According to the official website of the State of Delaware, which displays the information on a Delaware entity.

The list with the entity name ‘Grayscale’ included the MANA trust with the other assets LINK trust, BAT trust, FIL trust, and XTZ trust. It is speculated as to Grayscale is considering adding more assets as per the analyst WolfofCrypto.

However, the lists include the search results of both active and inactive entities in their database, not indicating the current status of an entity. Therefore till any official announcement is provided by the hedge fund, it is very hard to predict.

Also Read: Bitcoin Price May Slip to Much Lower Levels, Will It Ever Bounces Back to Hit $100k?

MANA Price Analysis, Will it hit $1?

Huge selling pressure mounted on MANA price in the early trading hours, and hence a drastic plunge was expected in the later hours of trading. But there was a complete flip when a large influx of volume was injected which rallied the price nearly 60% from the lowest levels.