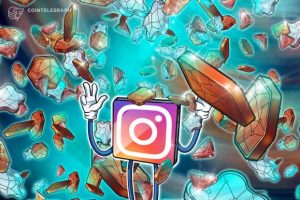 Meta, Facebook and Instagram’s parent company, announced another development in its digital arts initiative. As of Sept. 29, all users on both platforms can connect wallets and share nonfungible tokens (NFTs) across 100 countries.

As part of the feature, which has been in testing since May, users will be able to tag creators and collectors, and cross-post digital collectibles between platforms without paying any fees.

In August, Meta started allowing users to post digital collectibles that they own across Facebook and Instagram and announced an international expansion to countries in Africa, Asia-Pacific, the Middle East and the Americas.

The company also added support with third-party wallets such as Rainbow, MetaMask, Trust Wallet, Coinbase Wallet and Dapper Wallet, along with support for the Ethereum, Polygon and Flow’ blockchains.

Several Twitter users expressed concern regarding the safety and privacy of the data transmitted by connecting digital wallets to Meta’s platform at that time. In April 2021, sensitive personal information for over half a billion Facebook users was leaked on a well-trafficked hacking forum.