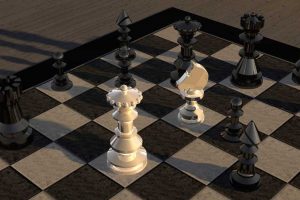 If you are into chess and bitcoin, then this upcoming tournament is likely to keep you fully entertained.

Do Chess and Bitcoin Go Together?

Some of the world’s biggest and best chess players are gathering to play for a massive, six-figure bitcoin prize. The competition will feature as many as 16 grandmasters – including the top ten chess players in the world – to battle each other on the board and possibly get their hands on a massive crypto prize.

The contest is known as the FTX Crypto Cup. The winner of the championship will be entitled to approximately $220,000 plus an additional $100,000 in BTC. The event is sponsored by leading digital currency exchange FTX, which is also providing the BTC reward. The entire competition is also set to take place completely online, making this the largest-ever prize for such an event.

Sadly, things are already off to a rocky start as the bitcoin prize has since fallen to about $81,000 at press time given the volatile nature of the cryptocurrency. Chess is all about strategy; you decide your moves in your head and locate your pieces accordingly. You may have to change things around here and there to stay in the game, but for the most part, the best chess players typically see the game fully played out in their heads before they ever sit down to move their first pawn.

Bitcoin, on the other hand, is an entirely unpredictable asset that can go up or down at a moment’s notice. The currency is presently experiencing one of its most volatile phases ever, having skyrocketed to about $64,000 per unit in April only to fall to about $37,000 at the time of writing. This is a loss of nearly $30,000 in just a matter of weeks and marks the biggest dip the currency has ever experienced in its 12-year history.

There was a time when the $100,000 bonus fell below $70,000 and considering play time is set to last through May 31, there are still windows here and there for the master left standing to experience a solid dip in his or her winnings.

Not Everyone Is Okay with Crypto Payments

While bitcoin has garnered quite a bit of respect over the past year, the currency still attracts heavy notoriety given its consistent price swings. Bitcoin – like many crypto assets – was initially designed to serve as a payment tool that would knock credit cards and fiat currencies to the side. Unfortunately, its volatile nature has made many stores and retailers think twice about potential crypto payments. Thus, only a select few – such as Overstock.com – have said “yes” over the years.

A huge blow was dealt to crypto fans everywhere not too long ago when Tesla decided it would suspend its decision to permit bitcoin payments for all company-based goods and services due to concerns about the mining process.