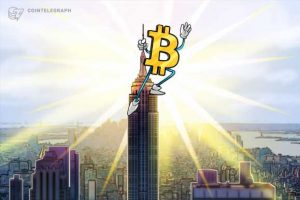 Townsquare Media, a New York based digital marketing and radio station company is the latest business to back the original cryptocurrency with its addition of $5 million worth of Bitcoin (BTC) to its balance sheet.

A filing with the Securities and Exchange Commission (SEC) disclosing Townsquare’s purchase of Bitcoin was first picked up by Macroscope, a Twitter account which focuses on institutional trading who posted the find on May 10.

As per the filing the company “invested an aggregate of $5 million into Bitcoin” during the first quarter of 2021 and provided an explanation for why it chose a crypto investment, stating:

Whilst the price of Bitcoin at the time of purchase wasn’t disclosed Townsquare said it recorded an impairment loss of $400,000 resulting from “changes to the fair value” of its digital asset holdings over the quarter.

The so-called loss appears to be due to the unusual way companies need to report on crypto holdings. Townsquare also stated it could have sold its Bitcoin for $6.2 million total on March 31, the price of Bitcoin that day closed at a price of around $45,500. The company stated it views its Bitcoin investment as liquid due to the ease of converting it to cash using a crypto exchange.

Whilst the purchase is small in comparison to MicroStrategy’s nearly $3 billion stash worth of Bitcoin, Townsquare Media is around the middle of the list in terms of the amount of the crypto held by publicly traded companies.

According to Bitcoin Treasures, a site tha measures Bitcoin held by companies, Townsquare would sit somewhere around the Bitcoin mining companies Cleanspark Inc which holds around $4.3 million and Cathedra Bitcoin Inc. who holds just over $5 million worth of Bitcoin.

With the price of Bitcoin sliding this year and recently hitting 10-month lows, other companies with big positions in the world’s first cryptocurrency have reported losses due to having the asset on their balance sheet.

Earlier in May crypto investment manager Galaxy Digital Holdings reported a $111.7 million loss in the first quarter of 2022 due to unrealized losses on its cryptocurrency portfolio. MicroStrategy CEO and Bitcoin advocate Michael Saylor also had to assure investors that the company could cover its debts if asked due to a Bitcoin backed $205 million loan it took out in March.