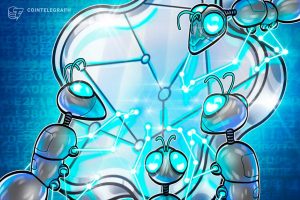 Catch up on nonfungible token (NFT)-related news this week as Cointelegraph rounds up the stories you don’t want to miss.

Bored Apes gets cast in an TV series

The Red Ape Family (TRAF) is a new animated comedy series centered on Bored Ape Yacht Club (BAYC) NFTs. Episodes are sold as individual NFTs and run between 5 to 10 minutes long. The plot is about a family of Bored Apes that escape Earth to live on Mars.

OpenSea is already reselling Episode 1 and the yet-to-be-released Episode 2 is available to mint. One Episode 1 token holder received a Bored Ape, three token holders won two Mutant Apes, and others were airdropped a poster, gravity sneakers and a discount to mint Episode 2.

The cast, made up mostly of Bored Apes, will also include Mutant Apes, the Bored Ape Kennel Club, Coolcats, Craniums and Lions. Rapper 2 Chainz is an executive producer. The first episode is available on YouTube:

The Weeknd’s “Blinding Lights” song became the No. 1 song on Billboard’s Greatest Songs of All Time Hot 100 Chart and to mark the milestone, the artist and Billboard released a series of NFTs this week.

The seven-piece NFT collection includes a one-to-one NFT featuring The Weeknd’s November 2021 Billboard cover, as well as three trading cards, each in two editions, inspired by the “Blinding Lights” music video. Each piece is signed by The Weeknd.

Fans can purchase these NFTs on Tom Brady’s Autograph marketplace.

Mini Royale: Nations, a web-based first-person shooter, became the first live multiplayer game to run on Solana after existing as a blockchain-integration-free game for months. Following the launch of its first in-game NFT items, the number of active players has doubled.

However, Mini Royale is not a play-to-earn game. An NFT acts as an in-game avatar and owners can receive benefits, including the game’s upcoming CHEDDAR token. So far, Mini Royale NFTs have sold for 17,637 SOL, worth roughly $3.2 million, on the Magic Eden market place.

RadioShack makes a comeback in crypto

After filing for bankruptcy twice in 2015 and in 2017, the century-old former electronics retailer is planning to launch the RADIO token as part of “RadioShack DeFi” that will enable users to trade tokens via the Atlas USV protocol. Atlas USV is a project that is attempting to build a universal base layer for the DeFi sector.

According to its proposal, RadioShack’s new mission is “to be the first protocol to bridge the gap in mainstream usage of DeFi.” By targeting “blue-chip, large corporations” and aiding their transformation into blockchain companies, RadioShack wants to educate CEOs and an older generation of crypto users.

As the year draws to an end, Cointelegraph rounded up the top ten NFT projects of 2021 based on trading volume and communities.