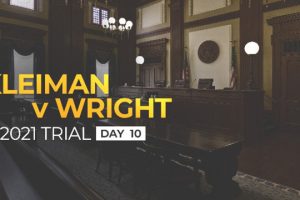 The Kleiman v Wright trial continued Tuesday, with the plaintiffs resuming their examination of Dr. Matthew Edman. Day 10 of the Satoshi trial in Florida also saw the defense cross-examining Dr. Edman, followed by the plaintiffs doing a redirect of Dr. Edman before resting their case. And then the defense called their first witness to the stand.

Dr. Edman’s examination picked up from where it left off on Day 9, following the same trajectory it started on. Plaintiff’s lawyer Kyle Roche introduced evidence to the court in the form of emails, Bitmessages, and PGP messages supposedly from Dave Kleiman and Dr. Craig Wright, and Dr. Edman testified he believed the documents being presented as evidence were forged documents. Dr. Edman also explained that he believed the documents were forged because the metadata indicates they were modified, altered, or manipulated. The plaintiffs even took it one step further and tried to make the case that the documents were forged by Dr. Wright himself.

But when the cross-examination began, defense lawyer Andres Rivero made it clear that there is no way to know who forged the documents—just because the metadata indicates that the evidence was modified after its original point of creation does not mean it was Dr. Wright who modified them. Rivero pointed out it could be anyone who had access to—or a version of—the document between the time it was created and the time that it was modified.

Rivero also questioned Dr. Edman about how he selected the 40 documents that he reported to be fraudulent, and Dr. Edman admitted that the plaintiff’s lawyers presented him with those 40 documents and asked him whether they were forged or not. Interestingly, the 40 documents had a 100% hit rate and were all reported as forgeries by Dr. Edman. He also admitted to not examining Dave Kleiman’s hard drives, the piece of evidence that would most likely act as the point of origination or source for many of Dave’s allegedly forged emails.

To conclude his cross-examination, Rivero produced a piece of evidence that Dr. Edman reported was forged—an email from Dave Kleiman that read:

Rivero did this to show the court that there are crucial pieces of evidence that the plaintiffs are relying on to have been deemed fake by the forensic expert they have hired; therefore, these pieces of evidence should be taken with a grain of salt.

Afterward, Roche did a redirect of Dr. Edman and tried to reinforce the idea that it was Dr. Wright who forged the documents. To make this argument, the plaintiff reintroduced a piece of evidence that showed an IP address from Australia associated with the modification of the documents. Afterward, the plaintiff played a portion of Dr. Wright’s video deposition in which he said he was born in Brisbane, Australia, a city located 4 miles away from the location of the IP address.

Then, the plaintiff rested its case; and lawyer Zalman Kass proceeded to call the defense’s first witness to the stand, Kevin Madura. Madura has a degree in computer science and a master’s degree in technology management. Madura, a blockchain expert, began his testimony by laying out Bitcoin’s history and educating the jury on how Bitcoin works.

Although Madura’s testimony had just started and only ran for about 20 minutes on Day 10, Madura emphasized the idea that “the developer of Bitcoin was a sophisticated coder,” and that when Madura reviewed Dave Kleiman’s background, it was not evident that Dave Kleiman could code in any language.

“Did you see any evidence that Dave Kleiman knew how to Code,” Kass asked.

“No,” replied Medura, and then court adjourned for the day.

While Dr. Edman was on the stand, the plaintiffs tried to make the point that there are numerous forged documents and tried to imply that it was Dr. Wright who forged them. They tried to support this claim by providing an Australian-based IP address associated with the forgeries and then playing a clip from Dr. Wright’s deposition in which he says he was born in a town located very close to the IP address that was cited.

The cross-examination of Dr. Edman was all about showing the court there is no way to prove or show who forged the documents, that Dr. Edman, a purported computer scientist, did not use the scientific method when analyzing the documents for forgery, and that he is not classically trained in identifying forged documents. Rivero also reminded the court that Dr. Edman has been retained by the plaintiffs and that the company he represents is paid an hourly rate by the plaintiffs to perform services for the plaintiffs—services such as identifying forged documents. If what Dr. Edman is saying is true and some evidence has been forged, the defense said that it is damaging to the plaintiff’s case because they are relying on some of that evidence to make their case.

We have only seen a sliver of Madura’s testimony, but it seems like his role is to educate the jury on what Bitcoin is and how Bitcoin works—similar to what the plaintiffs retained Andreas Antonopoulos to do, except Madura is a classically credentialed blockchain subject matter expert, unlike Antonopoulos.

There is no telling what tomorrow has in store, but many people are looking forward to seeing what the defense can unearth about Dr. Craig Wright, Dave Kleiman, and the creation of Bitcoin as this case inches to an end.

CoinGeek features Kurt Wuckert Jr. in recap coverage which will be livestreamed daily at 6:30 p.m. EST on our YouTube Channel.

Check out all of the CoinGeek special reports on the Kleiman v Wright YouTube playlist.