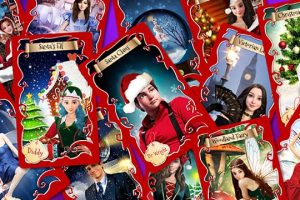 Following close behind its well-received Halloween NFT collection, the Women of BSV group has released another series of collector tokens just in time for Christmas. The series, designed again by talented artist Ruth Heasman, is available on the RelayX token market and features the faces of well-known (and less well-known) people in the BSV industry.

Speaking to CoinGeek, Heasman said RelayX still provides the best interface for NFT creators. “They’ve continued developing the interface and it now has a transaction history feature, which we are very happy about.”

RelayX makes it easy for artists to upload designs and mint NFT tokens, allowing them to create the tokens, specify quantities and list on its market with just a few clicks. No technical knowledge (other than the ability to create a digital artwork itself) is required.

BSV blockchain the only realistic option for NFTs

Creating NFTs for any purpose is superior on the BSV blockchain. While Ethereum and a handful of other contract-focused blockchains have grabbed a lot of the mainstream attention, Bitcoin-based NFTs are the only ones to have all token data stored on-chain. Some collectors and traders have learned the hard way that tokens purchased on non-BSV blockchains contain no token data at all, but rather links to data stored elsewhere, such as IPFS. If the token data is deleted or moved from its off-chain storage location, the owner/buyer is left “owning” nothing at all—not even virtually.

This separation between token data and blockchain ownership records makes non-BSV NFTs and tokens almost worthless as assets. It has caused enough problems already in the world of simple collectibles and art, but if tokens were used to track ownership of serious business assets and contracts, it could lead to disaster. Then there are the problems with issuance costs and system scaling, which are much more of a hindrance on Ethereum.

About the Women of BSV Christmas NFT series

The Women of BSV Christmas series features all members of the collective (in less fearsome roles than the Halloween set) as elves, angels, and fairies. Dr. Craig S. Wright is in his traditional red as a smooth-shaven Santa, and Ian Grigg is a late-night station master.

CoinGeek team members made a strong showing in the Christmas editions. Entrepreneur and CoinGeek owner Calvin Ayre is “Caribbean Santa” and Charles Miller is an English gent (the only two cards close to being real-life depictions). Appropriately, Kurt Wuckert Jr. and Patrick Thompson are town criers, Becky Liggero Fontana is a caroler and Stephanie Tower is celebrating New Year’s Eve, while this writer and Bryan Daugherty appear as Santa’s Elves.

Heasman said the Christmas series has fewer cards than the Halloween edition but just as many faces—the idea was to include more of the people she didn’t have time to draw for the Halloween series.

“Making Kurt and Patrick into town criers was an easy and obvious decision. I like a more traditional Christmas theme, harkening back to a more rose-tinted and bygone idea of Christmas. Diddy as an elf was a no brainer as she used to be an Elf professionally! The photo of Craig Wright is his red shirt and braces has always screamed Father Christmas to me anyway, and after his court case win seemed like a fitting portrayal.”

The Women of BSV have proven one of the most productive projects in the BSV blockchain space in late 2021. Their aim is to promote the benefits of BSV and particularly (though not exclusively) women working in the space, through a series of video interviews, social media campaigns, meetups and of course, NFT collectibles.