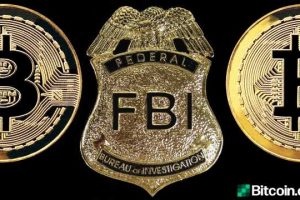 Over the last eight years, U.S. law enforcement has seized a great number of bitcoins and at one time, the Federal Bureau of Investigation (FBI) held one of the largest bitcoin wallets after the Silk Road takedown. A recently published report shows the FBI has started using cryptocurrency mixing applications in recent times in order to obfuscate transactions from seized bitcoins that stem from a forfeiture.

The U.S. government is far from transparent and a newly published report shows just how shady the feds can be these days. The author Joshua Davis explains with great detail that the FBI has been evading “transparency and accountability” specifically when law enforcement has been handling funds from a seizure. For years now, the FBI, the United States Department of Justice (DoJ), and FinCEN have said that the use of bitcoin mixers should be criminalized.

The Feds have prosecuted operators of large centralized bitcoin mixers as well charging the operators with illegal money transmission charges and claiming that mixing facilitates crime. These days, cryptocurrency mixers are less centralized and bitcoiners can leverage bitcoin mixers that are built into a noncustodial wallet. Davis explains how “FinCEN is criminalizing Bitcoin mixers” and that anyone using them could be “accused of violating Anti-Money laundering laws.” The report also details how the FBI is “routinely” using bitcoin mixers and has been for a few years now.

The report shows that the FBI seized 39.67 BTC from a man in Tucson, Arizona, and the case involved unauthorized SIM swaps. According to Davis’ findings, the FBI sent updates to the victims and “made it seem as if the cryptocurrency had been already sold.” However, blockchain data shows this wasn’t the case and the victims were told a “clerical error” was made.

FBI Overpaid Bitcoin Miners by a Factor of 4700%

“To be 100% clear the FBI does not need a money transmitter license to act as a lawful Bitcoin tumbler because government agencies are exempt from needing to obtain a Money Services Business (MSB) license,” Davis’ report insists. “Instead what I’d like to humbly point out is that the law requires funds to be “safeguarded against waste, loss, unauthorized use, or misappropriation.” As far as those four things to safeguard against, Davis found that “waste” seemed to have been chosen instead of transparency.

Davis assumes that the FBI could have “overpaid bitcoin miners by a factor of 4700%” and fees would be massive when you multiply that by 2x or 5x. The report concludes that Davis doesn’t have any issues or really anything against the FBI in general, but he doesn’t appreciate the hypocrisy. The author also noted how the former U.S. Drug Enforcement Administration agent Carl Force and the former Secret Service agent Shaun Bridges stole money from the Silk Road case. Force was able to steal 1,200 BTC and Bridges was able to snag 3,100 bitcoin. “They would have gotten away with it if they had taken one extra precaution,” Davis said. “Their downfall was failing to use a tool called a bitcoin mixer.”

Moreover, a representative from the FBI emailed the author of the report and he further explained: “The FBI has stated unequivocally in an email that the funds are still held as Bitcoin. They are required by law to hold these funds as bitcoin and not convert these funds to cash.”