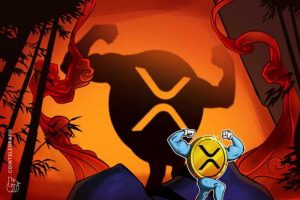 Amid a weekend pump carrying multiple cryptocurrencies higher, Ripple’s XRP looks to be leading the way with a push as high as 30% on the daily — carried on the back of a string of legal victories and rumors of relisting at some exchanges.

Where Bitcoin and Ethereum are up merely 2.7% and 3.4% respectively on the day, XRP climbed to $1.36 before retreating to $1.32, where it sits at the time of publication. The digital currency is now up 111% on a 7 day basis, and a staggering 544% on the year. The recent push has also buoyed XRP back into the top 10 cryptocurrencies by marketcap, behind only BTC, ETH, and BNB at #4.

The rally flies in the face of a lawsuit from the Securities and Exchange Commission, which charges that XRP’s $1.3 billion ICO was an “unregistered securities offering.” The news led multiple exchanges to delist the currency, and XRP lost its place as the 3rd largest currency by marketcap, at time looking as if it would even fall out of the top ten.

The bad news for XRP didn’t stop with the SEC, either. In March Ripple CEO Brad Garlinghouse announced that the company would be “winding down” its relationship with Moneygram — a once highly-touted partnership that investors often pointed to as proof of the digital currency being on a path towards becoming “the standard” for payments and settlement.

Despite the deluge of negative headlines, it appears all buyers needed was a small ray of hope to jump back in — and they’ve gotten exactly that. Ripple lawyers have notched two victories in their legal battle against the SEC, including winning access to internal SEC discussion history regarding cryptocurrencies, and a court denied the SEC the ability to disclose the financial records of two Ripple execs, including Garlinghouse.

Ripple executives themselves seem heartened by the news, with CTO David Schwartz saying the US isn’t “prepared” to regulate cryptocurrencies (a possible dig at the ongoing legal proceedings).

All in all, it’s just another week for one of the most controversial cryptocurrencies in the space.