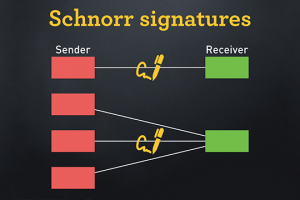 We have implemented Schnorr signatures on Bitcoin. It is the first and only known implementation without any changes to the original protocol¹.

Schnorr is an alternative algorithm to the ECDSA algorithm currently used for signatures in Bitcoin. One key advantage is that multiple signatures, either in one input or multiple inputs of the same transaction, can be aggregated into a single signature. There has been a lot of hype about Schnoor signatures on BTC, which requires enormous changes as BIP 340 details.

We have shown how to implement it, using just the original Bitcoin protocol. The full code to verify Schnorr signatures is listed below, using elliptic curve operations we released previously.

[1] The legal implication of using Schnorr signatures is out of the scope of this article.