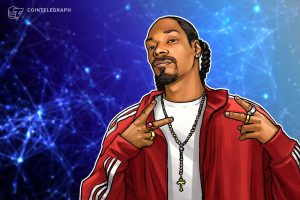 The “Decentralized Dogg” NFT was minted on SuperRare on Nov 29 at 7:15 PM UTC and will be on auction until Dec 3. SuperRare is a digital NFT marketplace that caters to buyers willing to pay up for more exclusive pieces.

The NFT is a stereoscopic 3D collage of 10 different portraits of Snoop Dogg from various stages throughout his life, underscored by an original NFT-inspired soundtrack by Snoop. At the time of writing, the highest bid was 169 Ether or about $760,000 at current prices.

Snoop’s long-time innovation and investment partner Nick Adler told Cointelegraph that the NFT drop is only the “beginning of Snoop’s work in the NFT and art space.”

He indicated that depending on how well the NFT performs, Snoop would be “absolutely open to future collaborations with Coldie or other iconic NFT artists.” Coldie told Cointelegraph that Snoop’s management directly contacted him about collaborating on an NFT through SuperRare.

Adler also mentioned that Snoop plans to have an ongoing relationship with the collector or DAO (decentralized autonomous organization) that ends up purchasing the NFT.

“For us, what’s interesting about the current climate is that we plan to sort of continue to evolve this piece. Like maybe we could use this piece for other works we do, whether it’s the cover of a future album or a book,” he said.

Coldie also told Cointelegraph that Snoop’s management team has considered using the artwork as augmented reality labels for wine bottles, or as a book cover.

“We could do Snoop wine bottles that use augmented reality, where the portrait comes to life on a wine bottle. That leads so much more value to the collector because he’s got millions of eyes on the artwork.”

In a recent interview about the NFT, Snoop Dogg said: “This technology has inspired me to rethink how I work and release my art into the world.”

“You don’t just see it, you feel it and you hear it. You digg? I want this piece to stand out as a representation of my vision in the metaverse. It’s Decentralized, Decentral eyes.”

The artwork will be shown at SuperRare’s nftnow x Christie’s trade show ‘The Gateway’ at Miami Art Week on Dec 3. It also will make an appearance at the Flagler Street Art Festival on Monolith during Art Week in downtown Miami between Nov. 30 and Dec. 5.

On Sept. 21, Snoop announced he had been using a pseudonym to hide in plain sight as NFT Twitter influencer, “Cozomo de’ Medici”. The wallet associated with the account has amassed an NFT collection worth over $17 million, including nine CryptoPunks and a number of marijuana-themed tokens.

Coldie’s NFT collaboration with John Van Hamersveld’s “The Unfolding Dream” in partnership with Async is also currently up for auction until Dec. 10. He told Cointelegraph that collaboration with fellow digital artist Sarah Zucker is on the cards for the coming months.