Home » Crypto » Sovryn is Putting Bitcoin Back On Its Throne

Sovryn is Putting Bitcoin Back On Its Throne 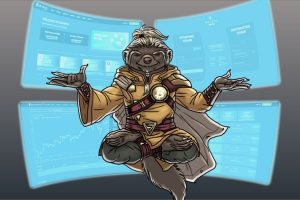 As the creation story was to the world, so was Bitcoin to cryptocurrency. Since its inception, Bitcoin has allowed for countless innovations. Blockchain technology in general, Altcoins, NFTs, and so many other projects all owe their success to the pioneering work of Satoshi Nakamoto. The last decade brought with it cryptocurrency introduction into the mainstream and that has slowly led to widespread acceptance of crypto as a mainstay of society.

This decade seems to be geared more towards the development of already existing chains and newer projects seem focused on fixing relevant problems as we move ever closer to the actualization of decentralization and web 3.0. The race to decentralization, however, seems to be one that Bitcoin has been largely left out of. Although respected for what it represents, and the path it has made for others, the difficulty of creating on Bitcoin’s network means it has lagged while others like Solana, Ethereum, and Cardano now edge closer to the finish line.

Sovryn seeks to change all that. In a race where Bitcoin has fallen behind in respect to decentralization, Sovryn seems to be the boost it needs to catch up and maybe even move past the other networks currently ahead of it. Fully launched in April of this year, Sovryn is a project looking to bring true decentralization to Bitcoin. Using Ethereum’s EVM technology, the Sovryn team is attempting to create the first true Defi system on Bitcoin’s blockchain and making it a proper contender for networks such as Ethereum. Funded by investors including Greenfield One, Monday Capital, Pomp, Collider Ventures, and others, the team has also gained massive support from industry masters like Anita Posch and Dan Held.

Although it is easy to dismiss any dev team looking to create on Bitcoin’s blockchain as a maximalist with tunnel vision, there is an argument to be made for them. All other coins regardless of their achievements only truly have the space to do what they do because Bitcoin pioneered the movement. The problem arose when innovation that needed to be made met with the impracticality of building on Bitcoin. This led to different paths from the one initially made by the pioneer coin.

Regardless of this, Bitcoin remains the top coin in the world by market cap and its insane effects on the market show that it still is held in high regard by many people. In essence, it is the ‘US Dollar’ of the crypto world, causing large price movements in the market depending on its performance. The amount of attention evidently on it simply shows that if anyone were to be successful in moving Bitcoin well into the DeFi space the way Ethereum has, then they would reap infinite rewards.

To that effect, the Sovryn team might be on to something good here. Looking at the primary problems on the chain, they have devised solutions to counteract them. Implementation of EVM-compatible smart contracts, Ethereum’s rollup technology as well as integration of taproot’s bridging ability are all steps in the right direction. These innovations by Sovryn will hopefully allow them to bring affordability, speed, and compatibility to the Bitcoin network- three features which it lacks and desperately needs if it hopes to keep up with its competitors.

If this is properly done then the current crypto landscape and Bitcoin’s already significant backing could lead a mass migration back onto the network, leaving maximalists infinitely happy and Sovryn very successful.

Giving Control Back To The User

As it stands, Bitcoin’s incompatibility means that access to it is highly centralized, a far cry from Satoshi’s initial vision. People hoping to obtain Bitcoin usually have to go through centralized exchanges and increasing regulations means that those exchanges could eventually be indistinguishable from traditional financial corporations.

Sovryn is looking to create a system to combat this. Given recent regulatory developments, their goal holds some weight. One such example is the ‘travel rule’ which would require far more information than necessary to be collected on crypto users- a direct contradiction of crypto’s goal of anonymity and decentralization.

Although regulation can be a good thing as any unregulated system can run out of control, a certain balance is needed. Whether Sovryn will find that balance remains to be seen but if they can manage to find a good middle ground between decentralization, practicality, and security, they could be just what Bitcoin needs to claim the Defi crown.