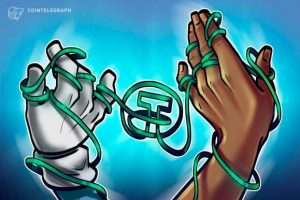 The world’s largest stablecoin, Tether (USDT) has expanded its circulating supply following almost three months of reductions, in what could be a sign the crypto markets are slowly recovering.

The first mint in almost three months occurred on July 29, and there have been three more, with the latest on August 2, according to CoinMarketCap. The USDT injections have been small, however, lifting Tether’s market cap by just 0.7% or just under $500 million.

According to the Tether transparency report, there is now 66.3 billion USDT in circulation. This gives the stablecoin a total market share of around 43%.

Tether supply reached an all-time high in early May when it topped 83 billion USDT. The collapse of the Terra ecosystem, resultant crypto contagion, and large-scale redemptions forced the company to reduce the circulating supply, which fell 21% to a low of 65.8 billion in late July.

This has enabled rival company Circle to increase the market share of its stablecoin USDC, which now commands a 36% slice with a $54.5 billion market cap. As reported by Cointelegraph last month, USDC volume on Ethereum actually flipped Tether’s for a period as the number two stablecoin continues to catch up.

Over the weekend, Binance CEO Changpeng Zhao commented on the amount of stablecoins poised to re-enter the markets, stating:

“3 of the top 10 are stablecoins, meaning there is a lot of “fiat” sitting sidelines, ready to get back in. If people wanted to get out of crypto, most won’t hold stablecoins.”

Stablecoins currently represent 13.6% of the entire crypto market capitalization, which is close to its all-time highest levels

Related: Circle’s USDC on track to topple Tether USDT as the top stablecoin in 2022

A cost of living crisis caused by surging global inflation may have put the brakes on crypto investing and speculation for retail traders. However, those living in countries with extreme inflation levels, such as Argentina, have held onto to USD-pegged stablecoins as a hedge against their own currencies.

Tether acknowledged the benefits of holding stablecoins, stating that USDT “allows Argentinians to access a market that is truly global and liberates them from local black markets,” adding that it also “empowers them to hold Tether in ways that cannot be confiscated by the government, unlike local bank accounts.”