The 5 weirdest crypto stories of 2021 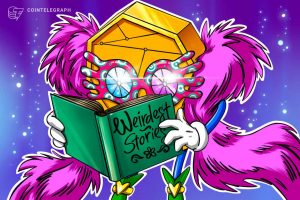 In 2021, the market cap of cryptocurrencies skyrocketed 286% year over year, uplifting a $2.17 trillion industry into the stratosphere. But, with this vast creation of wealth comes the explosion of peculiar tales throughout the sector. From the suspicious death of multiple crypto-evangelists and crypto scams involving hacked Twitter accounts of heads of states to much-promoted celebrity NFT drops that bombed at the auction, 2021 was truly a wild year for the cryptocurrency cyberspace. Without further ado, let’s look at the top strangest stories that have captivated blockchain enthusiasts this year.

No 1. The death of John McAfee

On June 23, John McAfee, crypto-evangelist and namesake founder of antivirus software company McAfee, was found dead in a Spanish jail cell in an apparent suicide by hanging. The United States, one of the few countries that impose a taxation-by-citizenship regime — that is, Americans are taxed on their worldwide income each year regardless of their country of residence — had been seeking McAfee’s extradition for failing to file his income tax returns from 2014 to 2018 and allegedly not reporting income for his crypto projects. McAfee was arrested in Spain pending U.S. tax evasion charges. Back in 2018, McAfee was allegedly charging as much as $105,000 per Tweet to promote initial coin offerings (ICOs) on social media.

In another Tweet two years prior, McAfee stated: “If I suicide myself, I didn’t. I was whacked,” leading to conspiracy theories that the businessman’s death may have resulted from an orchestrated attack. McAfee is remembered for his pioneering ventures in programming, early adoption of Bitcoin (BTC) and his eccentric personality. He famously said that he would “eat [his own] dick on national television” if the price of BTC did not reach $500,000 by 2020. In November, McAfee’s original software development company was acquired by private investors for $14 billion. McAfee is survived by his widow Janice McAfee and his children (of which McAfee claimed to have at least 47).

No 2. India‘s prime minister appears to tweet out a BTC scam

Indian prime minister Narendra Modi‘s Twitter account was hacked again in December, with scammers claiming that India had adopted BTC as national tender, and 500 BTC are available for immediate distribution to Indian nationals who sign up via a phishing link. The tweet was briefly viewable to the public and Modi‘s 73.4 million followers before it was taken down. The year prior, a cybercrime group known as “John Wick” hacked the prime minister‘s Twitter account and posted messages asking his followers to make crypto donations.

Several hypotheses exist as to why Modi became a target of these Bitcoin scam hacks. One possible motive was revenge for the ongoing Bitcoin scandal in India‘s Karnataka state. According to Indian media outlets, Karnataka police and governmental officials allegedly received 12,900 BTC in bribes from hacker Srikrishna Ramesh, who was arrested for hacking three crypto exchanges and other websites in the previous years. When Karnataka chief minister Basavaraj Bommai asked about the issue in a meeting with Modi in November, the prime minister allegedly brushed off the issue. India currently faces a chaotic regulatory environment regarding the state of crypto affairs in the country. 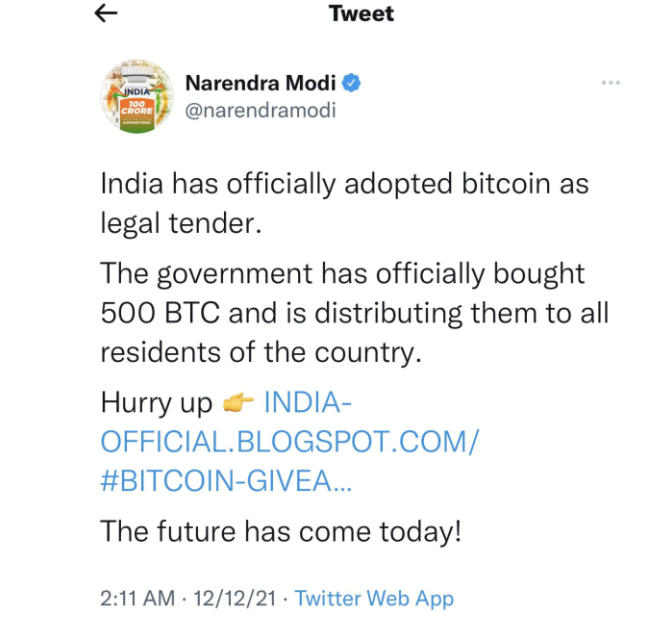 Back in November, a group of retail investors formed a decentralized autonomous organization, or DAO, intending to pool money to purchase the last privately-owned first-edition print copy of the United States Constitution at a public auction hosted by Sotheby‘s. Constitution DAO raised $49 million via Ether (ETH) donations from 17,437 participants. On the day of the auction, however, the piece of the constitution was outbid by Ken Griffin, CEO of Citadel, whose firm owned hedge funds that shorted Gamestop shares to the discontent of many retail investors promoting the stock.

The ConstitutionDAO disbanded shortly afterward and issued refunds to its stakeholders. While it may be that the “proletariat” investors have nothing to lose but their chains, it‘s clear that the “bourgeois” won‘t allow them to be unshackled so easily.

No 4. Elon, Tesla and Bitcoin

Cryptocurrencies have been on a wild roller coaster ride this year, possibly in part to Tesla‘s CEO Elon Musk. Promoting digital meme currencies such as Dogecoin (DOGE) and aside, Musk‘s indecisive approach when it came to Tesla‘s Bitcoin adoption created and wiped out many fortunes.

In March, Musk sent investors into a buying frenzy after announcing that Tesla would accept BTC as payment for consumers to purchase its electric cars. Two months later, the momentum reversed and turned into a full-on market rout after Musk dropped the plans, citing environmental concerns with network mining. Then in October, Tesla said it would reconsider adding BTC as a method of payment. Through all this, however, Musk became more popular as a helmsman, leading retail investors and crypto enthusiasts alike through the storms of capital markets. He was recently elected Person of the Year by Times Magazine.

No 5. The unsold NFTs of Tupac Shakur

For 29 years, former hip-hop journalist Lawrence “Loupy D” Dotson held on to a series of photographs of famed-rapper Tupac Shakur. The photos were taken at the rapper‘s “2Pacalypse Now” debut album release party in 1992 and were announced for public auction in the form of nonfungible tokens, or NFTs, in November of this year. In an interview with Cointelegraph, Loupy D stated: “I also considered photo exhibits, museums, all kinds of ways. With NFTs, it’s not just about the asset itself but the story behind the asset. I knew I needed to get my story out there in the public eye.”

The OpenSea auction had notable press coverage beforehand, including from RollingStone and Fortune.com. For a week, the auction continued. However, not a single piece was sold out of the 18 Tupac photo NFTs. In his disappointment, Loupy D took them off the platform and opened them up for private inquiries. But, to be fair, the photographer may have been asking too much, as each NFT piece had a minimum bid of 25 ETH ($100,000). Earlier this year, another artist asked 200 ETH ($1 million at the time) for a photo of Tupac Shakur taken 14 days before his death in a drive-by shooting. That NFT has not sold despite the price dropping down to 10 ETH. Simply asking too much or has Tupac‘s popularity faded? You be the judge.