The political Santas and Grinches of the crypto industry in 2021 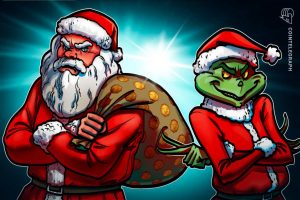 2021 was a huge year for the crypto industry. A few years ago, our elected officials probably hadn’t even heard of crypto before, let alone had an opinion on it. However, this year it seemed like crypto was the hot topic on the block all around the globe.

Here is a list of the most outspoken crypto advocates and critics from the parliaments and white houses around the world.

First up for crypto Santa is Miami Mayor Francis Suarez. In August, the city launched MiamiCoin (MIA). Revenue generated from the token is used to fund community projects in the city, with Mayor Suarez saying in a November interview that each Miami resident with a digital wallet could soon be eligible to receive a Bitcoin (BTC) dividend from the yield of MiamiCoin.

In February, Suarez announced plans to enact the “most progressive crypto laws” in the United States. Fittingly, this year’s Bitcoin conference was held in Miami, attracting the largest crowd in the annual event’s history, cementing the city’s position as a growing hub for cryptocurrency.

The first Grinch who stole crypto-mas is Indian Prime Minister Narendra Modi. On Nov. 18, he called on all democratic nations to work together to regulate cryptocurrency, specifically Bitcoin, to “ensure it does not end up in the wrong hands which can spoil our youth.” He also shared his concerns that if unregulated, crypto could become an avenue for “money laundering and terror financing.”

On Nov. 23, the Indian government introduced a bill to impose a ban on “all private cryptocurrencies,” prompting a massive sell-off in the country. Since then, the creator of the bill, former Finance Secretary Subhash Garg, has dismissed the notion of banning “private cryptocurrencies” as a misinterpretation.

Of course, this list would be hardly complete without the one and only President of El Salvador, Nayib Bukele. In June, El Salvador passed President Bukele’s “Bitcoin Law,” which made BTC a legal tender in the country.

A slew of protests followed as citizens became concerned that their savings and pensions were at risk, but merchants still accept Bitcoin as payment, as per the law.

Since then, the Latin American country hasn’t slowed down on its crypto adoption with plans to build 200 ATMs and 50 branches capable of converting BTC into USD. The country has been slowly adding to its BTC reserve, and further plans to make a “Bitcoin City,” a full-scale municipal project with residential areas, shopping centers, restaurants and a port, all of which will be centered around Bitcoin adoption.

Proving that cryptocurrency is indeed not a partisan issue, the next anti-crypto Grinch is Senator Elizabeth Warren. In a June session of the Senate Banking Committee, Warren described crypto as a “fourth rate alternative to real currency,” adding that it is a “lousy investment” because it has “no consumer protection.”

The anti-crypto rhetoric didn’t stop there, with the Massachusetts senator saying that it’s “worth considering” banning U.S. banks from holding the reserves to back private stablecoins in a September interview with the New York Times. She also infamously called the cryptocurrency industry the “new shadow bank.”

Only days later, she went after the Ethereum network in a Senate Committee Hearing with Gary Gensler. She said that “high unpredictable fees can make crypto trading really dangerous for people who aren’t rich.”

Talking about pro-crypto politicians, it would be hard to miss Australian Liberal Senator for NSW Andrew Bragg. He has been an outspoken advocate for cryptocurrency and digital assets in Australia over the past year. As the chairperson of the Senate Committee on Australia as a Technology and Financial Centre, Bragg oversaw the publication of Australia’s “crypto report” in October.

The report made 12 recommendations intended to tackle key issues pertinent to the cryptocurrency sector including a tax discount for crypto miners using renewable energy, new licenses for crypto exchanges, an overhaul of capital gains tax in decentralized finance and new laws to govern decentralized autonomous organizations (DAOs). He also spoke out against Australian banks, which he claimed were dressing up “anti-competitive behavior” as regulatory compliance and debanking crypto customers.

Arguably, Chinese President Xi Jinping single-handedly played the most influential global role in crypto this year. Jinping has often spoken about the benefits of blockchain technology, and his administration is in the process of rolling out a digital yuan central bank digital currency (CBDC). Despite this, his government has taken some significant steps to limit the use of cryptocurrency in the country over the past year.

Another pro-crypto U.S. mayor to make the cut is Eric Adams from New York. This year, we’ve seen some friendly rivalry between him and Miami Mayor France Suarez over who is the bigger crypto advocate out of the mayors.

When Bitcoin podcaster Anthony Pompliano tweeted asking who the first American politician to accept their salary in Bitcoin will be in early November, Miami Mayor Francis replied saying that he plans to take his next paycheck in Bitcoin. Not to be upstaged, Adams one-upped his colleague, saying, “In New York, we always go big, so I’m going to take my first THREE paychecks in Bitcoin when I become mayor.”

He also said that he plans to make New York the “center of the cryptocurrency industry” once he takes office in January. Since then, Adams has been busy launching NewYorkCityCoin (NYCCoin), and has even indicated plans to add crypto to the curriculum in schools.

Who could forget Congressman Brad Sherman’s anti-crypto rant at the House Financial Services Committee earlier this month? Attempting to illustrate how easily different cryptocurrencies can dethrone each other, he asked, “what could Mongoose Coin do to Crypto Coin?” In response, the crypto community minted a batch of mongoose-inspired coins overnight.

Sherman has been the U.S. representative for California’s 30th congressional district since 2013, and has made his case against crypto for almost as long. As previously reported by Cointelegraph, Sherman has reportedly received more than $100,000 in campaign donations from top financial firms.

Another pro-crypto politician who made waves this year is U.S. Democratic candidate Matt West, although he perhaps has a slightly more personal connection to the industry. West spends his days campaigning for the upcoming Democratic primary election in May 2022 for Oregon’s 6th Congressional District. By night, he is a decentralized finance (DeFi) strategist for Yearn.finance.

Although his platform is mostly on par with his fellow Democrat representatives in congress on other issues like the environment and healthcare, he has been very outspoken about the benefits of blockchain technology and cryptocurrency. In a November interview with Cointelegraph, West said that “cryptocurrency should not be a partisan issue. It’s too big for that.”