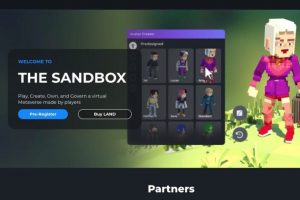 In a recent interview, Sébastien Borget, a co-founder and the chief operating officer (COO) of The Sandbox, said that he feels the Ethereum-powered metaverse is “a digital nation”.

What Is The Sandbox?

The Sandbox is a subsidiary of Animoca Brands.

Animoca Brands, which was founded in January 2014 by Yat Siu and David Kim, and its various subsidiaries “develop and publish a broad portfolio of blockchain games, traditional games, and other products, many of which are based on popular global brands, such as Formula 1®, Disney, WWE, Power Rangers, MotoGP™, and Doraemon. Animoca Brands is also a prolific investor with over 100 investments in NFT-related blockchain companies, including Sky Mavis (Axie Infinity), Dapper Labs (NBA Top Shot), OpenSea, Harmony, Bitski, and Alien Worlds.”

Here is how Binance Research described The Sandbox back in August 2020:

“The Sandbox is a virtual world built on the Ethereum blockchain, where players can build, own, and monetize their gaming experiences… The SAND token is an ERC-20 utility token that is used for value transfers as well as staking and governance… Players can create digital assets in the form of Non-Fungible Tokens (NFTs), upload them to the marketplace, and integrate into games with Game Maker.“

And here is the how The Sandbox team describes SAND and LAND:

“SAND is the utility token used throughout The Sandbox ecosystem as the basis for transactions and interactions. It is an ERC-20 utility token built on the Ethereum blockchain. There is a finite supply of 3,000,000,000 SAND.“

“The Sandbox Metaverse is made up of LANDS, that are parts of the world, owned by players to create and monetize experiences. There will only ever be 166,464 LANDS available, which can be used to host games, build multiplayer experiences, create housing, or offer social experiences to the community.“

According to data from Ethereum-powered NFT marketplace OpenSea, currently (as of 6:55 a.m. UTC on January 12), the cheapest LAND you can buy in the The Sandbox metaverse is ETH 3.45 (which is worth roughly around $11,000 at the time of writing).

On 2 November 2021, The Sandbox announced that it managed to raise $93 million in its latest funding round, which was led by SoftBank Group’s second venture capital fund, Vision Fund 2.

On the same day, The Sandbox tweeted that this investment round will help it scale up its “growth strategy, operations, and player acquisition” in The Sandbox’s ecosystem “while sending a clear statement that the world’s most innovative fund believes in Web3 and decentralization as the next major trend.”

The company went on to say that its new strategic partners, such as Galaxy Interactive, will also “benefit The Sandbox’s global reach and expand the network of brands, IPs, and gaming studios interested in entering an open metaverse focused on a player-owned economy and UGC.”

The Sandbox also highlighted its success in the world of virtual real estate:

Finally, the firm pointed out that it rewards creators on its platform with “95% revenue share” and “reinvesting 50% of all $SAND revenue streams into the Foundation, now worth $100M+, which gives grants to artists, creators and players.”

The Sandbox COO’s Interview With Decrypt

Last month, The Sandbox COO Sébastien Borget told crypto news outlet Decrypt that although the “play-to-earn” metaverse has not been released yet, many people are trading LAND parcels in advance of this event:

“Every day, the map is different. There are new landowners and new communities that come and decide to build things next to each other. I feel like it’s a digital nation—living and breathing. That’s why it’s exciting. It’s culturally rich, it’s global, and it’s accessible.“

Borget said that he felt a bit apprehensive about allowing people to take part in last month’s public Alpha test:

“It’s almost this fear of jumping into the void and getting a lot of backfire and other criticism. Maybe people will enter it and say: ‘Oh, that’s it? The metaverse—is it really that boring? It looks ugly, it’s full of bugs, it’s not a lot of fun,’ maybe. And that didn’t happen.“

On December 23, The Sandbox announced that a second Alpha test event would be coming soon:

As for plans for the future, Borget told Decrypt that his startup plans to:

“The metaverse needs to be built by the people. Once they’re building with our tools and they create experiences that will be ready to be open to the public—and we’re live on layer-2 for publishing experiences on their LANDs—I think that will be a great time to start.”