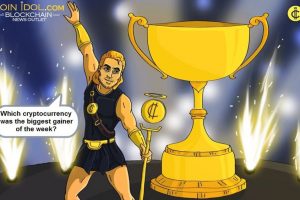 Compared to other altcoins, PAX Gold has performed very well. PAXG has risen to a new high of $1734.34 and has maintained this level. Buyers have continued the uptrend. With the resumption of the bear market, TON, OKB, LTC and MKR are bumping back to their overarching resistance levels.

The price of PAX Gold (PAXG) is rising after a rally to a high of $1734.34. A slight correction was followed by a continuation of the upward momentum. The price of the cryptocurrency is approaching the overbought zone of the market. The altcoin retested the $1,750 resistance area on September 13, but was rejected.

Since the resistance level has not been breached in the last two months, the current uptrend will face a similar rejection. The current rally may not last as the daily chart’s stochastic is overbought in the 80% area. The characteristics of this coin, which is the best performer this week, are as follows: 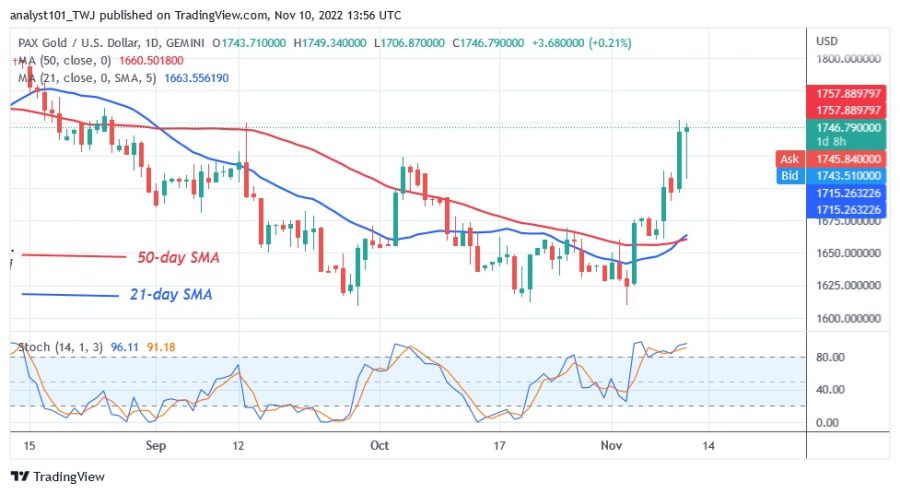 Toncoin (TON) is struggling in a sideways trend against the overhead barrier at $2.00. Since September 7, it has been difficult for buyers to break through the overhead resistance. The price of the cryptocurrency has been fluctuating erratically between $1.20 and $2.00, and the uptrend will continue if the price bounces back and breaks the $2.00 level.

As the Relative Strength Index (RSI) for the period 14 is 51, TON is trending in the right direction. According to the RSI, supply and demand are in balance. It is the second best performing cryptocurrency this week. It is characterized by the following features: 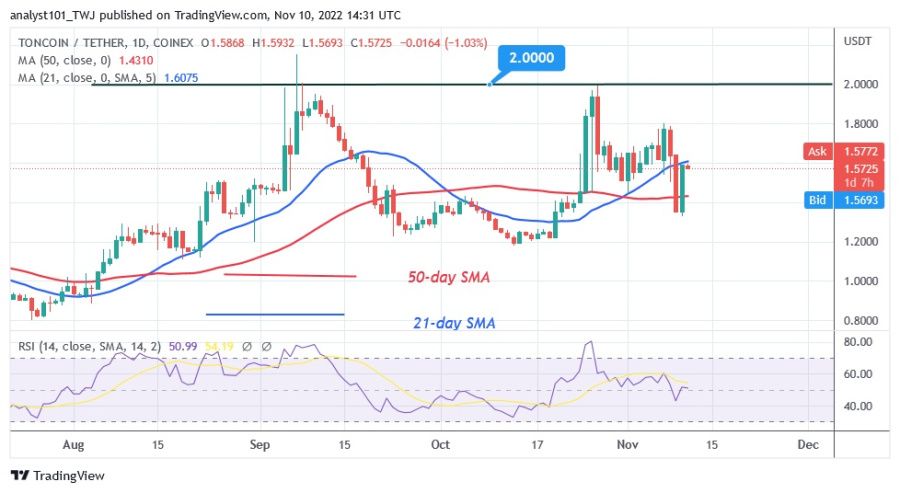 OKB (OKB) has risen above the moving average lines, indicating an uptrend. The current rise is expected to end soon as the market reaches the overbought zone. During the October 29 upswing, a retraced candlestick tested the 38.2% Fibonacci retracement line. The retracement predicts that OKB will rise when it reaches the Fibonacci extension level of 2.618 or $37.49.

Currently, OKB is at the 80 level of the daily stochastic. This shows that the market has entered the overbought zone. It is unlikely that OKB will move further up. Among all cryptocurrencies, it has the third best performance this week. It has the following characteristics: 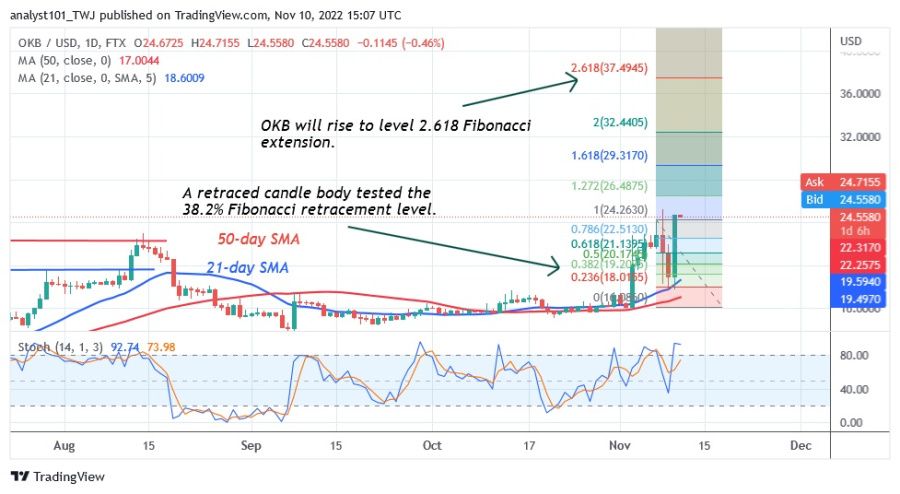 The price of Litecoin (LTC) is rising to retest the $64 resistance while in a downtrend. Support will most likely be at the $64 breakout level before the coin crashes. On October 25, the price of LTC rose and crossed the 50-day line SMA. Before its decline, the altcoin rose to a high of $73. Below the $73 resistance level, the already existing uptrend has come to an end.

The Litecoin price is currently below the moving average lines. However, if the LTC price rises back above the moving average, the breakout level at $64 and the resistance level at $73 will be retested or breached. Litecoin, the fourth best performing cryptocurrency this week, has the following characteristics: 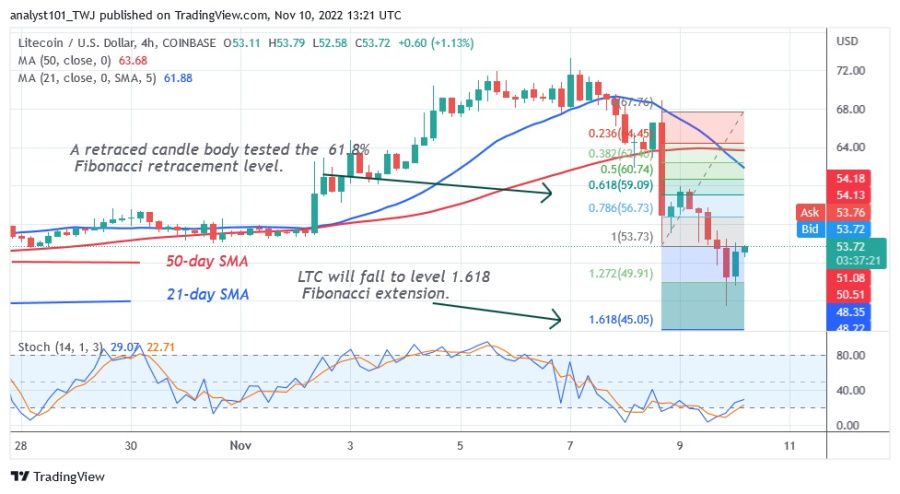 The price of Maker (MKR) has fallen below the moving average lines, indicating a decline. The altcoin fell to a low of $622 before starting to rise again. The moving average lines rejected Maker. The coin reversed higher during the decline on November 3, and a candlestick tested the 78.6% Fibonacci retracement level. After the correction, MKR will fall to the level of Fibonacci extension 1.272 or $734. Based on the price movement, MKR has fallen to a low of $831. In terms of weekly performance of all cryptocurrencies, MKR ranks fifth. It has the following characteristics: 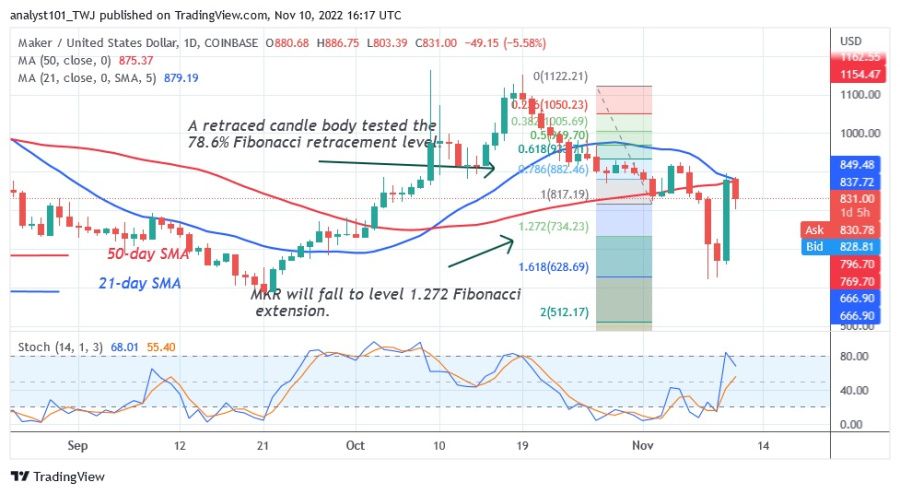 Disclaimer. This analysis and forecast are the personal opinions of the author and are not a recommendation to buy or sell cryptocurrency and should not be viewed as an endorsement by CoinIdol. Readers should do their research before investing in funds.