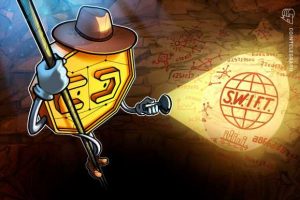 Mastercard CEO Michael Miebach said on Tuesday that he does not expect SWIFT, one of the most widely used platforms for cross-border fiat transactions, to exist in five years’ time.

Towards the end of the panel discussion, when the moderator asked each panelist whether they thought SWIFT would still exist in five years’ time, Miebach caused the audience to gasp in shock after answering “no”, according to a Cointelegraph reporter who attended the session.

The response had not been expected given his position at Mastercard, and that the panelists before him, including Jon Frost, a senior economist at Bank of International Settlements and Jennifer Lassiter, executive director of the Digital Dollar project, an organization tasked with exploring a United States CBDC had answered in the affirmative.

Other panelists following Miebach also took the affirmative viewpoint, including Yuval Rooz, CEO of Digital Asset, a data technology company and David Treat, director at Accenture and co-lead of the company’s blockchain business.

Cointelegraph approached Miebach immediately following the panel discussion, but was denied any further comment on the subject.

“Let us clarify the intent of the on-stage comment, as it’s not as simple as a yes or no answer. Michael was simply reinforcing what SWIFT has previously said – their operations continue to evolve. Its current form will not be the same in the future. They are adding more functionality and moving past just being a messaging system.”

SWIFT processed 42 million messages a day last year, but transactions on the network can take several days to complete. The company has been striving to maintain its relevance in the international economic order, especially in regard to CBDCs.

On May 19, 2022, SWIFT announced its second round of experiments involving CBDCs, collaborating with French IT company Capgemini to explore the linking of domestic CBDCs to facilitate seamless cross-border payments.

Cointelegraph reporters on the ground at Davos noted that in another panel session titled “Rules of the Road for Digital Economy,” Miebach talked about the role regulation can take in reducing the unnecessary noise around a nascent technology like crypto.

“Not everyone is screaming for regulation but it does reduce the noise in the crypto world. Engaging actively with regulators and being principled, I am optimistic,” he said.