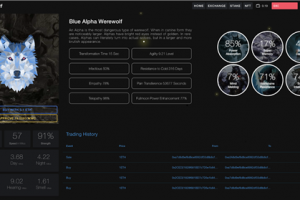 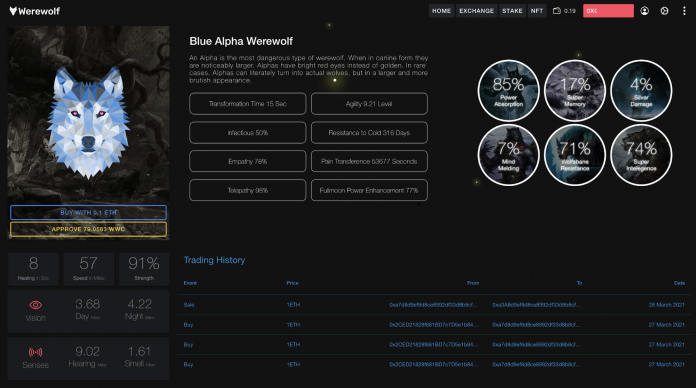 Every new year, the crypto industry seems to get a new annual trend, where some of the trends get to grow into established sectors, while others slowly fade away and get replaced by something else. For example, last year’s trend was DeFi, which exploded in June, and is still growing strongly with every passing day. However, this year’s trend appears to be NFTs (Non-Fungible Tokens), which are known as a tokenized version of real-world and other digital assets of value.

Now, the opinions of NFTs are split, and there are many who fear that critics might try to discredit the tech. However, as of right now, NFTs are extremely popular, and new NFT projects are emerging all the time. One of the most recent examples is the so-called Werewolf NFT, which was just announced a few days ago by the Werewolf Exchange.

What is Werewolf NFT?

Werewolf NFTs are a new group of assets that are being launched on the Werewolf platform that are giving its ecosystem a new edge and new products to offer on a highly competitive crypto scene. The tokens were created by using Ethereum’s ERC-721 token standard, and they will be used for gamification on the platform. There are several types of tokens, including: 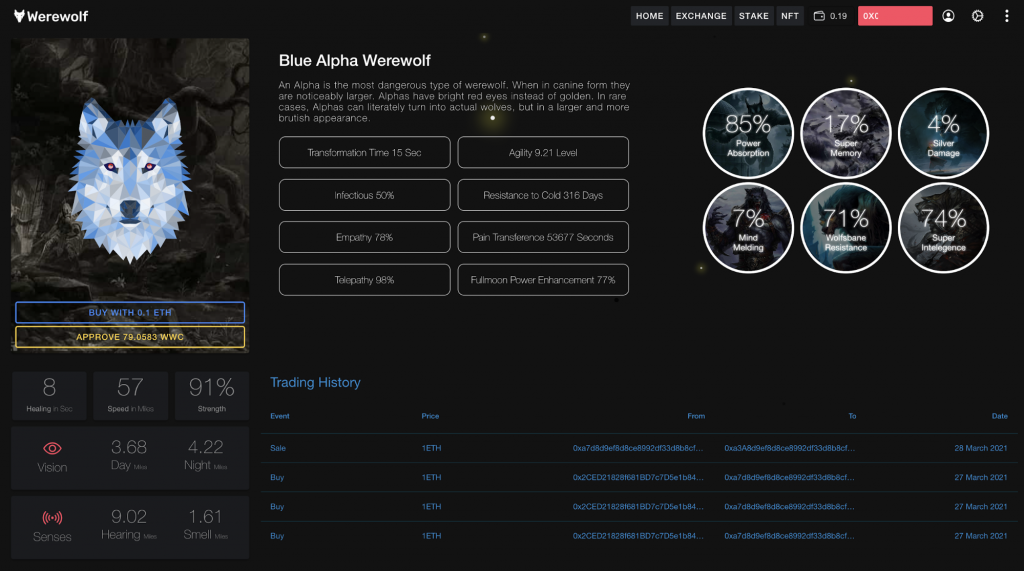 Each type of NFT has similar attributes as its canine counterpart. Alpha assets are the most ‘dangerous’ type of werewolf, with alphas having bright red eyes, and are larger and more brutish in appearance. They create new members of its kind, or shape-shifters, as the announcement explains it. On the platform, Alpha Werewolf NFTs will own a territory, and their total number will always be equal to the total number of territories that exist. Each Alpha Werewolf NFT will have powerful characteristics, such as Pain Transference, Full Moon Power Enhancement, Power Absorption, Empathy, and many others. 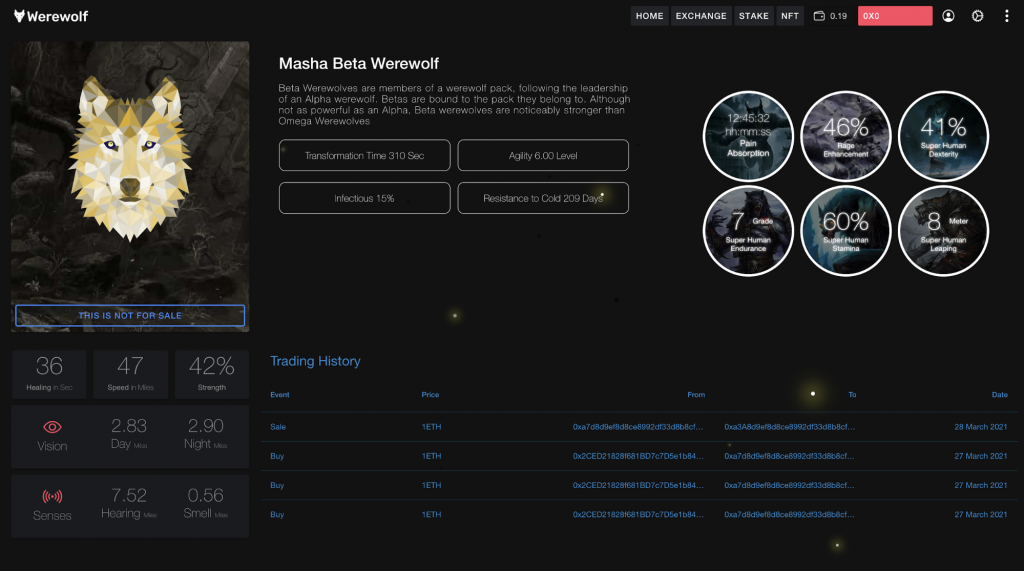 Beta Assets, or Beta Werewolves, will be members of a pack that follows the Alpha Werewolf. They are not as powerful as an Alpha, but are still significantly stronger than Omegas. They represent the main members of the pack, and are the most common type, easily identifiable by their gold color eyes. On the platform, they will be born in one of the territories and assigned to that territory’s Alpha, so one Alpha will be the leader of multiple Betas. They will also have specific powers, although different than those of Alphas, such as Rage Enhancement, Extraordinary Superhuman Leaping and Endurance, Superhuman Stamina, Dexterity, and more. 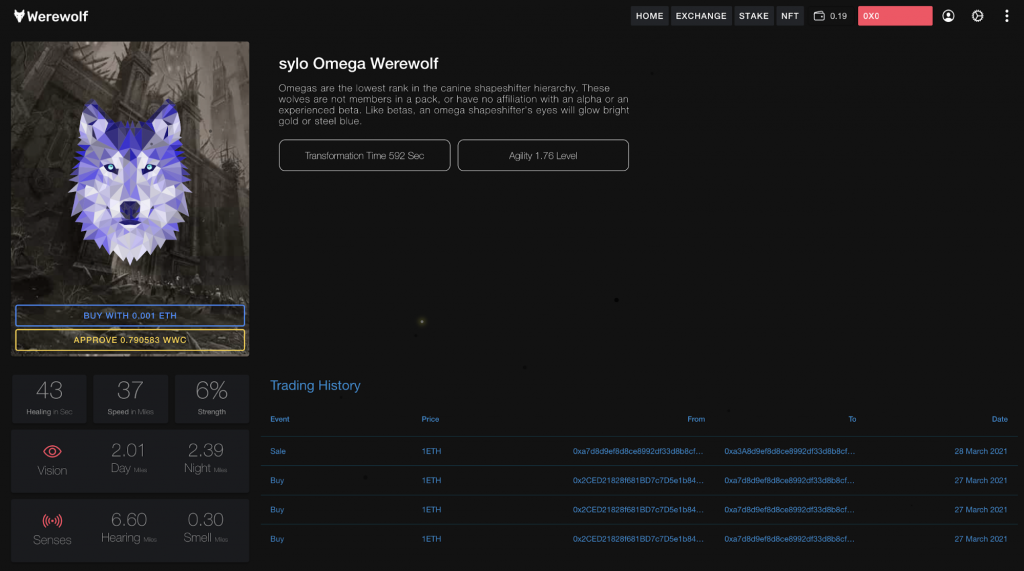 Lastly, there are Omega Werewolves, which are known for Blue color eyes, and represent the lowest rank in the hierarchy. These will not be pack members, nor will they have any sort of affiliation with any Alpha or Beta. They are considered loners and outcasts, but are searching for a pack. Despite it all, however, they are still very powerful.

The NFTs can be minted on the platform, and users get to choose to mint Alpha, Beta, or Omega Werewolves, and minting is currently free of cost, as long as users pay Network Fee — they get to own a Beta or Omega Werewolf Asset. Alphas, however, will need to be bought, as it comes with the control of a territory.

Alphas can be purchased with WWC — Werewolf Coin, which was announced earlier this year, in January, when the team revealed a Werewolf Coin IBCO (Initial Bonding Curve Offering) with its 1st generation WOLF token launched only two days earlier, on January 22nd. This was the start of the entire project’s tokenomics, and anyone wishing to participate was welcome from the start.

Essentially, the IBCO is a way for users to invest Ethereum in the official Werewolf Exchange and receive the token to their wallet. The token can also be used for staking. This is actually a very interesting and unusual approach, as the project offers 12 dates per year when it releases staking rewards. These are the days of the full moon in 2021, which all ties together nicely with the werewolf legend and theme of the exchange and its products.

So, the longer you stake your coins, the greater the reward you will get in the end. From that perspective, it pays to select one of the later dates when there will be a full moon this year, and stake until then. Each Moon Date is individually named, too, so users can know exactly which date they are targeting.