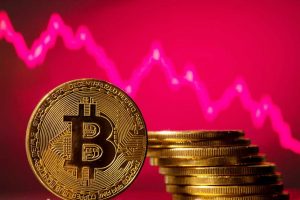 The price of bitcoin tumbled below $30,000 for the first time in more than six months on Tuesday — erasing its 2021 gains.

The price plunged more than 13 percent Tuesday morning to about $29,200 per coin, according to data from Coinbase.

That’s the lowest the price of bitcoin has been since December of last year.

Bitcoin has now dropped more than 55 percent from its all-time high of over $64,000 in mid-April.

The digital coin is down about 29 percent from a week ago.

Other major cryptocurrencies saw even bigger losses Tuesday morning, with ether, binance coin, cardano and XRP all down by double digits.

The morning’s losses extend a decline for bitcoin and the broader crypto market that began Monday after China intensified its crackdown on various aspects of bitcoin, including mining and transacting with cryptocurrencies.

The government-backed tabloid Global Times reported that many bitcoin mines in Sichuan Province and elsewhere were closed Sunday and would remain closed “at least for the short term.”

The paper estimated that more than 90 percent of China’s bitcoin mining capacity is currently shut down.

Mining is the energy-intensive process that both produces new bitcoins while also processing transactions made with the existing supply.

Later Monday, the People’s Bank of China said it summoned major lenders including Alipay, the payments service run by Alibaba affiliate Ant Group, and some of the country’s biggest banks.

The central bank said it directed them not to provide any services related to cryptocurrency activities.

The losses since those headlines have now knocked almost $400 billion off the overall crypto market.

Even despite the recent losses, the price of bitcoin is still up almost 200 percent from 12 months ago, according to Coinbase.