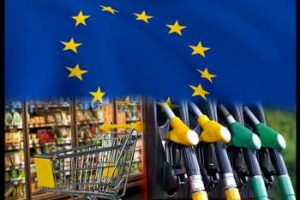 Eurozone inflation moderated for the first since the middle of 2021 driven by a marked slowdown in energy price growth, however the European Central Bank is expected to deliver another interest rate hike next month given the sticky core inflation.

Economists had forecast an annual rate of 10.4 percent. Nonetheless, prices registered a double-digit growth for the second month in a row.

There was a notable slowdown in energy price inflation in November, to 34.9 percent from 41.5 percent. Meanwhile, food inflation continued to trend up. Food, alcohol and tobacco prices moved up 13.6 percent after rising 13.1 percent a month ago.

On a monthly basis, the harmonized index of consumer prices edged down 0.1 percent in November.

Last month, the ECB raised its key interest rates by 75 basis points and expects to hike rates further, to ensure the timely return of inflation to its 2 percent medium-term inflation target.

Although headline inflation may now be past its peak, core inflation is likely to stay well above 2 percent throughout next year as underlying inflationary price pressures remains strong, Capital Economics’ economist Andrew Kenningham noted.

With its deposit rate still only at 1.5 percent, the ECB is sure to raise rates by at least 50 basis point in December, if not 75 basis point, the economist said.

Inflation slowed across major economies in the currency bloc, except France, where harmonized inflation held steady at 7.1 percent.