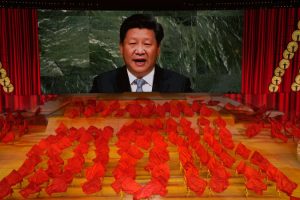 The Chinese Communist Party can at any time stop the collapse of the Evergrande Real Estate Group mushrooming into a systemic financial crisis: it controls the banking system and has hegemonic sway over the transaction counterparties.

It is hard to imagine a Lehman denouement in such circumstances. Beijing would not flirt lightly with such a risk before next year’s 20th Party Congress, intended to be the coronation of Xi Jinping for life.

It has been a staple of party propaganda for the last 13 years that the US banking collapse in 2008 discredited the Western economic model (it didn’t), and that such a disaster could never happen in China’s version of Leninist state-capitalism. This raises the political bar. 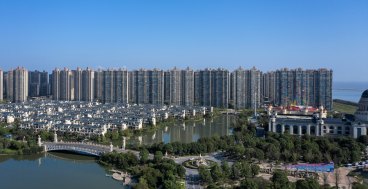 The implosion of property giant Evergrande is testing nerves.Credit:Bloomberg

But this episode is nevertheless fundamentally different from previous spasms of stress over the last 20 years, and it will test nerves. Xi Jinping is deliberately deflating the property bubble, deemed an economic cancer that is leading to dangerous inequality and is robbing resources away from China’s hi-tech ambitions. He has taken direct control over the purge from economic plenipotentiary Liu He, lately subjected to Maoist “rectification”, but without Liu He’s financial sensitivity.

What nobody knows in the West – and very few know in China – is how far Xi intends to go in punishing Evergrande and how far he intends to push his assault on moral hazard. The developers have $4.7 trillion ($6.5 trillion) of debt and few would be considered sound under Western accounting standards. Contagion has already engulfed Vanke, Country Garden, Sunac, and Kaisa, to name a few.

But assuming that this storm blows over, the underlying problem remains. China has overbuilt and over-borrowed for an ageing country with a declining workforce.

There has been an eerie silence from official Beijing for two weeks. The press is under a de facto gag order. Either there is no plan or regulators are trying to discover where Evergrande’s Jiayin Xu has hidden the dead bodies. Official liabilities are around $US300 billion, but the figures are opaque.

“There is always going to be more debt than we can see,” said Andrew Lawrence from TS Lombard.

Mr Lawrence once probed Evergrande on behalf of Western creditors, only to discover on site that most of the designated projects had not been started and that the money had been diverted to cover other costs.

The company was funding itself – like most Chinese developers – by pre-selling properties long before they were built. “They had massive negative free cash-flow and were basically borrowing to pay interests and taxes,” he said.

The trigger for the current squeeze was Xi’s “Three Red Lines” last year: a 70 per cent cap on liabilities to assets; a 100 per cent cap on net debt to equity; and enough cash to cover short-term debt. Developers that failed the tests lost access to credit, short-circuiting the perpetual Ponzi scheme. Evergrande responded the only way it could, by ramping up pre-sales even further until the music stopped.

Evergrande is not significantly more leveraged than its peers. It hit the buffers first because it relied heavily on short-term debt, like Northern Rock. “When the Three Red Lines were applied to 12 large developers last year, eight broke at least one, and four broke all three,” said Capital Economics.

“Other developers, which have a higher share of liabilities in the form of pre-sales and long-term borrowing, have so far avoided the same liquidity problems. But they too will come under growing pressure amid a deepening property downturn,” it said.

Danske Bank says Beijing will have to intervene to head off a domino effect and a severe financial crisis. But intervention can mean many things. Evergrande is the first real test case of Three Red Lines and more broadly a test of Xi Jinping’s war on “disorderly capital”. What is likely to emerge is a messy mixture that tries to decapitate and ring-fence Evergrande without giving others a licence to speculate. 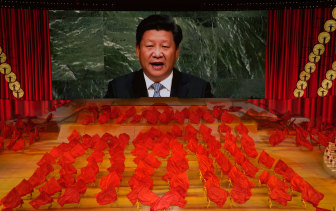 What nobody knows in the West – and very few know in China – is how far Xi Jinping intends to go in punishing Evergrande.Credit:AP

Those who have pre-bought homes will top the creditor pecking order: largely protected in the name of social stability.

The big state lenders will be cushioned by central bank liquidity. Chinese investors who sank money into Evergrande through “wealth management products” will suffer haircuts. Bondholders on the offshore dollar market can kiss goodbye to $US19 billion. Shareholders and foreign “tourists” will get nothing. The authorities will lean on state banks to keep lending developers enough to stay afloat.

But assuming that this storm blows over, the underlying problem remains. China has overbuilt and over-borrowed for an ageing country with a declining workforce.

“The root of Evergrande’s troubles – and those of other highly leveraged developers – is that residential property demand in China is entering an era of sustained decline. Relaxation of regulatory controls wouldn’t change this fundamental constraint,” said Mark Williams, Asia chief at Capital Economics.

The cohort of young adults climbing on to the property ladder is shrinking. The number of marriages has dropped by 31 per cent since 2013. The migrant flow from the countryside has dried up. “We expect demand for new urban housing to halve over the next 10 years,” said Mr Williams.

Construction is near 15 per cent of GDP, more than double the US subprime peak, and far greater than the Spanish peak in 2007. The closest modern parallel is Japan’s bubble in the 1980s, when the imperial gardens in Tokyo were theoretically worth more than California.

Japan never had the spectacular crisis many feared, but it has been in a slow economic slide ever since, struggling with post-bubble debt deflation in an ageing society. That is likely to be China’s fate from now on.

‘Even the very cautious pragmatic Chinese regulators may not yet be fully anticipating the depth of the possible fall in China’s housing prices.’

Harvard professor Ken Rogoff and Yuanchen Yang (now at the IMF), say Chinese property and construction amount to 29 per cent of GDP when all ancillary sectors are included. Housing makes up four fifths of personal wealth and land sales make 40 per cent of local government revenues.

They argue that this extreme dependence on the property nexus has not been tested because supercharged growth rates hide all sins. But China is no longer growing fast. Xi Jinping’s neo-Maoist ideology of “common prosperity” marks a profound break with the Deng Xiaoping catch-up model.

The US Federal Reserve’s Ben Bernanke once famously said “we’ve never had a decline in house prices on a nationwide basis” and nothing had substantially changed. But it had changed. The national Case-Shiller index would soon fall by 36 per cent.

The Rogoff-Yang paper said nothing should be assumed in the case of China either. “Even the very cautious pragmatic Chinese regulators may not yet be fully anticipating the depth of the possible fall in China’s housing prices,” it said.

Deflating an economy that is so hyper-leveraged to property is going to take years and will be untidy. China will almost certainly avert a Minsky crisis, but it may not avert a long grinding semi-slump that profoundly changes the world’s perception of the country.