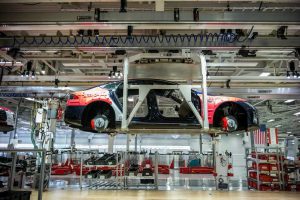 A black ex-employee at Tesla’s factory in Fremont, California, claims he was called the N-word “approximately 100 times” and saw KKK signs and swastikas graffitied in bathroom stalls.

“I was directly called n—– and n—- approximately 100 times at the Fremont factory,” Aaron Craven alleged in a sworn statement reviewed by Protocol. “I heard the terms n—– and n—- used over 100 times by coworkers, and by my lead Auggie, in the Tesla factory.”

Craven’s statement is one of more than 100 other declarations sworn under penalty of perjury that are part of a 500-page exhibit filed in March 2021 for a 2017 lawsuit that alleges Tesla discriminates against black people, Protocol reported.

Another of the statements is from ex-contractor Aaron Minor, who alleged he heard Tesla employees refer to the Fremont factory as “the Plantation” and its black employees as “cotton workers,” the report said.

“My understanding is that people refer to the Tesla factory as the Plantation and call employees cotton workers because Tesla treats its Black employees like slaves,” Minor reportedly wrote in his statement.

In addition to slurs, many of the other sworn statements allege that black workers struggle to get job promotions, are forced to perform tasks below their pay grade and that Tesla is not interested in investigating allegations, Protocol reported.

The 105 sworn statements that were filed in March are part of an effort to win class-action status in the 2017 lawsuit over alleged discrimination in the Fremont factory, which Tesla says employs more than 10,000 people.

Tesla has repeatedly argued in court that the allegations in the original 2017 suit, which was filed by former Tesla employee Marcus Vaughn, don’t represent a collective group experience, Protocol reported.

Larry Organ, an attorney for the California Civil Rights Law Group who’s represented several Tesla workers in discrimination suits, told Protocol that Tesla is “really focused on making cars, and less focused about their employees’ conduct in the workplace.”

“My personal view is that Tesla does not focus on investigating and preventing these claims,” he’s quoted as saying.

“It all depends on the facts of the case. However, what our class action has revealed and what the culmination of these cases shows, use of the N-word and other racist symbols like a swastika has been consistently used at the factory in Fremont since 2015.”