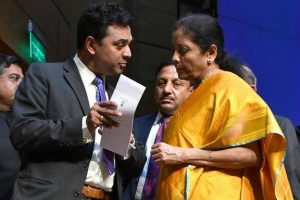 Chief Economic Adviser (CEA) K.V. Subramanian on Wednesday said India will clock over 7% annual growth during this decade on the back of strong economic fundamentals.

During the current fiscal, he said, growth would be in double-digits and it could moderate to 6.5 – 7% in the next financial year.

The Economic Survey 2020-21, released in January this year, had projected GDP growth of 11% during the current financial year ending March 2022.

The Survey had said growth will be supported by supply-side push from reforms and easing of regulations, infrastructural investments, boost to manufacturing sector through the Production-Linked Incentive (PLI) schemes, recovery of pent-up demand, increase in discretionary consumption subsequent to rollout of vaccines and pick up in credit.

"When you look at the data itself actually, the V shaped recovery and quarterly growth patterns actually established that the fundamentals of the economy are strong…the kind of reforms that we’ve done on it, and the supply side measures that we’ve taken will enable strong growth not only this year but going forward as well," he said.

Growth will be aided by various structural reforms, including labour and farm laws, undertaken by the government, he said while addressing a virtual event organised by the US-India Strategic Partnership Forum (USISPF) "This decade will be India’s decade of inclusive growth. In FY’23, we expect growth to be between 6.5 to 7%, and then accelerating further as the impact of these reforms are seen. On average, I expect growth to be greater than 7% in this decade for India," he said.

He also pointed out that the government is putting a lot of emphasis on capital expenditure as it has a multiplier effect.

The Budget estimate of capital expenditure for FY2020-21 was ₹4.12 lakh crore.