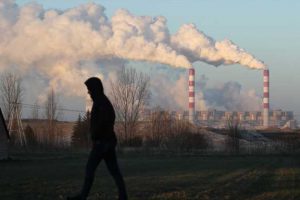 Hand wringing over the practice of greenwashing, or the corporate claiming of a climate agenda without any real effort, is starting to turn into action. Last week, in two instances, companies were penalized for either not doing enough to support their statements or for moving too slowly toward their greenhouse gas emissions goals.

The UK’s largest asset manager, Legal & General Investment Management, said it would sell the equity and debt of insurer American International Group (AIG) and three other companies for “insufficient action” in their efforts to reduce global warming. And the FTSE Russell stock index provider said it would expel up to 208 companies from its FTSE4Good Index if they don’t improve their environmental, social and governance policies in the next 12 months.

The actions signal a new phase in the evolution of the ESG market as investors and companies go from simply proclaiming broad and vague climate goals to penalizing those who are not moving fast enough. As more blacklists emerge at pension and portfolio managers, and the price of inaction becomes higher, many companies will face the flip side of the accolades they derived from simply claiming climate compliance. Depressed markets for their stocks and bonds and higher rates on their borrowings are just the beginning.

It will be fascinating to see which large investors will emerge as the kingmakers in this new market, and especially how this affects their competitive returns. It took years to get to this point, but now that we are here, expect to see rapid follow through from those pensions and asset managers who haven’t yet flexed their muscles.

Monday’s subscriber insights: GM, Volvo double down on electric vehicles – and their batteries

. . . . Both General Motors and Volvo are doubling down on their EV production estimates, with new battery manufacturing facilities at the heart of their plans. Investors applauded the announcements, which came with even tighter timelines for removing tailpipe emissions from the companies’ auto fleets. Read more here. . . .

. . . .The International Monetary Fund raised the idea of a carbon price floor in the biggest polluting countries last week, another in a series of attempts to deflect conversation away from the EU’s proposed carbon-adjustment border levy, and as carbon pricing begins to draw more wide-scale attention. Read more here. . . .

. . . . One of the greatest journalists I ever knew, Dick Stolley, passed away on Friday at 92, and for those of you who never heard the tale of how he secured the Zapruder film of President Kennedy’s assassination in Dallas in 1963, his obit is worth a read. Dick was a mentor and adviser to me for many years, as we shared an alma mater at Northwestern University’s Medill School of Journalism. RIP Dick. . . .

Sign up for a free trial of Callaway Climate Insights to see all of our best offerings each week, and archives of our best interviews.

The solstice symbolizes the fertility of the land, agricultural & food production systems, cultural heritage, and traditions. More on Monday’s International Day of the Celebration of the Solstice: bit.ly/2N9fFfv

A large methane plume over Russia earlier in June was the result of emergency repairs and a partial shutdown of a Gazprom PJSC pipeline, Bloomberg reports. The leak described as “enormous” was identified in satellite data from geoanalytics firm Kayrros SAS. According to the report, Gazprom said its pipeline repairs on June 4 released 2.7 million cubic meters (1,830 metric tons) of methane. That has roughly the same short term planet-warming impact of 40,000 internal-combustion cars in the U.S. driving for a year, according to the Environmental Defense Fund. Kayrros estimated an emissions rate of 395 metric tons an hour, which would make Gazprom responsible for the most severe release it has attributed to the oil and gas sector since September 2019.

Candy and pet-food giant Mars Inc. is backing a new coalition to support climate change action through global supply chains. Kevin Rabinovitch, vice president of global sustainability for Mars, tells Confectionary News that procurement is one of the most powerful tools in the company’s arsenal in the fight against climate change. The coalition, called the Supplier Leadership on Climate Transition, includes PepsiCo (PEP) and McCormick (MKC). Mars says the effort is to help suppliers by sharing knowledge, resources and tools to help them develop their own climate plans.

The IKEA Foundation and Rockefeller Foundation announced Monday a joint initiative targeting climate change and energy poverty, with the establishment of a $1 billion platform, focused on distributed renewable energy (DRE), ESG Today reports. The objective of the new platform seeks to “reduce 1 billion tons of greenhouse gas emissions, and to deliver clean and reliable power to the 800 million people worldwide who lack electricity, and a further 2.8 billion who have unreliable access.” Rajiv J. Shah, president of The Rockefeller Foundation, said in a statement, “Big, bold, and pioneering collaboration and investment is required not only for the short term, but also the long term, to galvanize a better future. That is why we are announcing our largest commitment to date and joining forces with IKEA Foundation to double that investment. Our partnership will unlock the financing and resources that are essential to provide clean, reliable electricity that improves the lives and livelihoods of people everywhere.”

Sign up with a 30-day free trial for all our news and insights.

. . . . According to the U.S. Environmental Protection Agency, between 1979 and 2018, the death rate as a direct result of exposure to heat (underlying cause of death) generally hovered between 0.5 and 2 deaths per million people, with spikes in certain years. Overall, a total of more than 11,000 Americans have died from heat-related causes since 1979, according to death certificates. For years in which the two records overlap (1999–2018), accounting for those additional deaths in which heat was listed as a contributing factor results in a higher death rate — nearly double for some years — compared with the estimate that only includes deaths where heat was listed as the underlying cause. The indicator shows a peak in heat-related deaths in 2006, a year that was associated with widespread heat waves and was one of the hottest years on record in the contiguous 48 states. . . .