Home » Economy » How the ‘mindset’ of business could worsen inflation woes

How the ‘mindset’ of business could worsen inflation woes

There are few bigger questions hanging over our economy than whether the wave of inflation hitting shoppers is temporary or long-lasting.

Judging from the surge in petrol prices and recent business warnings we’ll be paying much more for everything from Tim Tams to baked beans, you might assume the inflation genie is already out of the bottle. 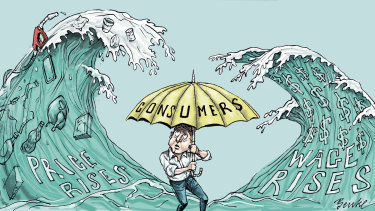 Consumers are being warned about inflation.Credit:Joe Benke

However, it’s not quite so simple. Do the businesses making these warnings only plan to pass on a one-off jump in their costs from raw materials, or transportation? Or are they trying to soften up the public for repeated price increases, which would also make them more likely to bump up wages for their staff?

The answer matters a lot in economics. It could determine whether the current inflationary pressures fade over time, or we fall into a spiral of progressively rising prices and wages — something central banks would stamp out with higher interest rates than otherwise.

A key challenge facing Reserve Bank governor Philip Lowe and his fellow economists over the coming months is to get to the bottom of the issue. In doing so, Lowe and the RBA will need to grapple with what they call “inflation psychology,” which is essentially a fancy way of asking how willing businesses are to pass on their rising costs to customers.

Inflation has become something of a fixation for financial markets in recent weeks, as the Ukraine conflict has added fuel to the already significant rise in oil and other commodity prices.

It’s clear these costs are spreading more widely in the economy, both in the obvious places like higher airfares, but also through more generalised price rises, in areas such as food (which needs to be transported).

Australia’s inflation rate was 3.5 per cent in the year to December, but it is virtually certain to climb considerably higher. Capital Economics has predicted the consumer price index would hit a 21-year high of 5.2 per cent in the September quarter, while Lowe has said inflation will be 4 or 5 per cent in the next couple of quarters.

Lowe has pointed out that for consumer prices to keep on rising at these rates in the longer-term, commodity prices would also have to continue rising — which is far from guaranteed. He expects commodity prices will eventually “wash through” the economy.

Even so, much will also depend on how companies respond to rising costs, particularly if they break what Lowe has called a “strong cost-control mindset”. 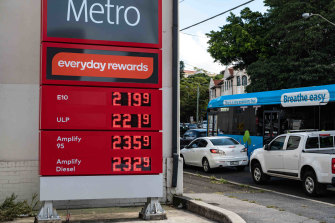 Rising petrol costs are a key cause of higher inflation, but prices are also increasing in other sectors.Credit:Flavio Brancaleone

For years, the RBA has been suggesting that a penny-pinching approach by business was a key reason why wage growth has been so miserable. It has said firms were too worried about losing business to put up their prices, and therefore were also reluctant to raise wages for their staff.

With prices now rising sharply, it’s possible businesses could change their attitude, and start thinking they can get away with raising their prices more aggressively. If prices start rising more generally, at a time when job vacancies are already at record highs and unemployment is at its lowest level since 2008, businesses may also be pushed into paying bigger wage increases.

There’s no obvious data point to measure if this mindset shift is happening, but the RBA will be watching the issue closely through its business liaison program.

But hang on, doesn’t the RBA want wages to go up more quickly?

Yes – Lowe has repeatedly said he wants higher wage growth of about 3 per cent, compared with 2.3 per cent currently, to support “sustainable” inflation. The point is, the RBA wants this process kicked off by solid pay rises in the labour market, rather than from businesses jacking up their prices due to higher input costs.

Why does it matter?

The risk is that if the inflation mindset of business and the community changes too sharply, it will be self-fulfilling. People could start thinking fast price growth is normal, raising the risk of a spiral of rising prices and wages, as occurred in the 1970s and 1980s.

To prevent this from happening again, central bankers like to keep inflation expectations “anchored” at a low level: the RBA’s target band is 2 to 3 per cent.

So far, there are early signs that the public’s expectations about inflation are starting to pick up – though it’s not that dramatic. Research from National Australia Bank economists has found inflation expectations — including those of the financial markets, consumers and union officials – have lifted to around average levels.

AMP Capital Investors chief economist Shane Oliver says inflation expectations are a bigger problem in the US, but we shouldn’t be complacent in Australia because things can change quickly.

“Beyond the war, it’s probably the biggest risk economies face at present. The longer this continues, the greater the risk that it will become entrenched,” Oliver says.

There is, of course, a certain circularity to all this: the perception of rising prices can be a powerful thing.

Whether the warnings of surging prices eventuate will partly depend on events out of our control, such as the war in Ukraine and its impact on oil and other commodities. But it will also depend on whether businesses change long-standing habits in how they set prices, and pay their staff.

Ross Gittins is on leave.