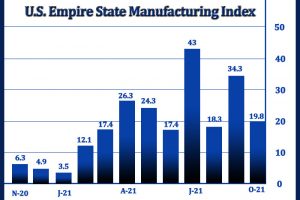 A report released by the Federal Reserve Bank of New York on Friday showed a notable slowdown in the pace of growth in regional manufacturing activity in the month of October.

The New York Fed said its general business conditions index tumbled to 19.8 in October from 34.3 in September, although a positive reading still indicates growth. Economists had expected the index to pull back to 27.0.

The steep drop by headline index came as the new orders index slumped to 24.3 in October from 33.7 in September, while the shipments index plunged to 8.9 from 26.9.

The report said the number of employees also fell to 17.1 in October from 20.5 in September, but the positive reading still indicates job growth.

Meanwhile, the New York Fed said the delivery times index inched up to a new record high of 38.0 in October from 36.5 in September.

Looking ahead, the New York Fed said firms were still very optimistic that conditions would improve over the next six months. The index for future business conditions increased to 52.0 in October from 48.4 in September.

“Our supply chain tracker signals that stress is still rising, and we don’t expect these challenges to meaningfully dissipate until well into 2022,” he added. “In the meantime, factories will do their best to keep up with robust demand.”

Next Thursday, the Philadelphia Federal Reserve is scheduled to release its report on regional manufacturing activity in the month of October. The Philly Fed Index is expected to drop to 26.0 in October from 30.7 in September.