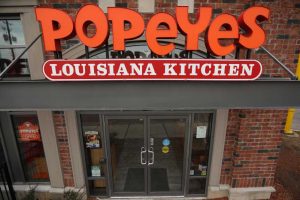 Burger King, Wendy’s are the latest to enter chicken wars

Popeyes Louisiana Kitchen will need all those frozen chickens it’s been hoarding.

The Miami-based chain has signed a lease for a large Times Square flagship in the Bowtie Building at 1530 Broadway, The Post has learned.

The new store will have more than 6,100 square feet on the ground and second floors between West 44th and 45th streets in part of the former Footlocker space. The asking rent was $800 per square foot but the final price wasn’t known.

It will open in the spring or summer of 2022, when Times Square pedestrian traffic is expected to soar after the reopening of Broadway later this year and the return of office workers. It will be the largest and most centrally located of Popeyes’ dozen-plus locations in the city.

Popeyes’ well-received chicken sandwich has been a huge hit. The fast-food chicken chain now plans on July 27 to launch a new line of nuggets, which it touts as “unlike anything you may have experienced before.”

Said Franco: “Sales have stayed strong despite the pandemic. As Times Square retail rents fell, we felt there was no better opportunity for Popeyes to open its flagship in the heart of the Bowtie.”

He called the deal “unique in that the base rent was adequate to satisfy the needs of the landlord combined with a percentage rent that will have both the tenant and the landlord share the upside of the deal.”