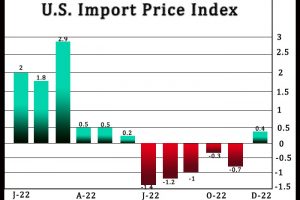 While the Labor Department released a report on Friday showing an unexpected increase in U.S. import prices in the month of December, the report also showed a much steeper than expected nosedive in export prices.

The Labor Department said import prices rose by 0.4 percent in December after falling by a revised 0.7 percent in November.

The rebound surprised economists, who had expected import prices to decrease by 0.8 percent compared to the 0.6 percent drop originally reported for the previous month.

The unexpected import price growth, which marked the first increase since June 2022, reflected higher prices for both fuel and non-fuel imports.

The report also showed the annual rate of import price growth accelerated to 3.5 percent in December from 2.7 percent in November. The year-over-year growth was expected to be unchanged.

“In a surprising turn of events, import prices recorded their first monthly advance in six months, ending the year on a down note after expectations for further declines in December,” said Matthew Martin, U.S. Economist at Oxford Economics.

He added, “Still, prices recorded a significant decline in H2 2022, and December is unlikely to signal a sustained reversal in this trend given the slowing levels of demand domestically and abroad.”

Meanwhile, the Labor Department said export prices plunged by 2.6 percent in December after declining by a revised 0.4 percent in November.

Economists had expected export prices to decrease by 0.5 percent compared to the 0.3 percent dip originally reported for the previous month.

The report also said the annual rate of export price growth slowed to 5.0 percent in December from 6.3 percent in November, showing the smallest year-over-year increase since January 2021.