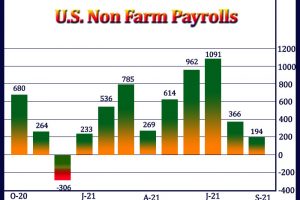 Employment in the U.S. increased by much less than expected in the month of September, according to a closely watched report released by the Labor Department on Friday.

The Labor Department said non-farm payroll employment rose by 194,000 jobs in September after climbing by an upwardly revised 366,000 jobs in August.

Economists had expected employment to jump by 500,000 jobs compared to the addition of 235,000 jobs originally reported for the previous month.

The much weaker than expected job growth was partly due to a seasonally-adjusted slump in education employment, which tumbled by 180,000 jobs as back-to-school hiring was lower than usual.

The report also showed employment in the leisure and hospitality sector increased by a relatively modest 74,000 jobs after spiking earlier in the year amid the reopening of the economy.

Meanwhile, solid job growth was seen in the professional and business services, retail, and transportation and warehousing sectors.

With the bigger than expected decrease, the unemployment rate slid to its lowest level since hitting 4.4 percent in March of 2020.

However, the drop in the employment rate was partly due to a decrease in the size of the labor force, which shrank by 183,000 persons compared to a 526,000-person jump in household employment.

The report also showed average hourly earnings increased by 0.6 percent to $30.85, with annual wage growth accelerating to 4.6 percent in September from 4.0 percent in August.

“We believe this marks the end of a string of poor job reports,” said Lydia Boussour, Lead U.S. Economist at Oxford Economics. “Looking ahead, we expect an improving Covid situation will support strong labor demand while helping liberate labor supply.”

“School reopenings and the forthcoming vaccination of children 5 to 11 years old should further bolster labor supply, especially following the expiry of emergency UI benefits” she added. “This should help push the unemployment rate toward 4.5% by year end.”