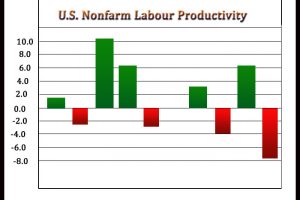 Labor productivity in the U.S. showed a substantial pullback in the first quarter of 2022, according to a report released by the Labor Department on Thursday.

The Labor Department said labor productivity plunged by 7.5 percent in the first quarter, reflecting the largest decline since the third quarter of 1947.

The steep drop in the first quarter came after labor productivity surged by a revised 6.3 percent in the fourth quarter of 2021.

Economists had expected productivity to tumble by 5.4 percent in the first quarter compared to the 6.6 percent spike that had been reported for the previous quarter.

The sharper than expected pullback in productivity, a measure of output per hour, came as output slumped by 2.4 percent and hours worked jumped by 5.5 percent.

“While we are optimistic about a productivity resurgence in the medium run, we expect productivity growth will remain modest this year amid moderating economic activity and continued labor market gains,” said Lydia Boussour, Lead U.S. Economist at Oxford Economics.

Unit labor costs were expected to spike by 9.9 percent compared to the 0.9 percent increase that had been reported for the previous quarter.

The sharp increase in unit labor costs reflected the steep drop in productivity as well as a 3.2 percent jump in hourly compensation.

The Labor Department said unit labor costs surged 7.2 percent over the last four quarters, reflecting the biggest increase in this measure since the third quarter of 1982.