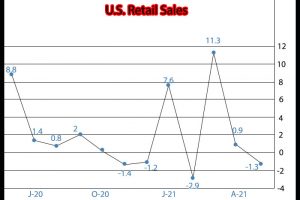 Partly reflecting a sharp pullback in auto sales, the Commerce Department released a report on Tuesday showing retail sales in the U.S. tumbled by much more than expected in the month of May.

The Commerce Department said retail sales plunged by 1.3 percent in May, while economists had expected a 0.8 percent decrease.

However, the steep drop came following a significant upward revision to the data for the previous month, which showed retail sales climbed by 0.9 percent in April compared to the unchanged reading originally reported.

The bigger than expected decrease in sales in May came as sales by motor vehicle and parts retailers plummeted by 3.7 percent in May after spiking by 4.3 percent in April

Excluding auto sales, retail sales still slid 0.7 percent in May after coming in unchanged in April. The unchanged reading for April was revised from the previously reported 0.8 percent drop. Ex-auto sales were expected to inch up by 0.2 percent.

Meanwhile, the decrease was partly offset by a 1.8 percent jump in sales by food services and drinking places, which Michael Pearce, Senior U.S. Economist at Capital Economics, said suggests the recovery in services consumption is on solid footing.

Closely watched core retail sales, which exclude automobiles, gasoline, building materials and food services, fell by 0.7 percent in May followed a revised 0.4 percent dip in April. The drop in April was revised from the previously reported 1.5 percent slump.

“Based on the retail sales figures, we calculate that consumption rose by a modest 0.2% in May, but factoring in a 0.6% rise in the deflator, that still means that real consumption probably fell,” Pearce said.

He added, “Nevertheless, the big upward revisions to the April data mean we are still penciling in a 10% annualized rise in consumption in the second quarter.”