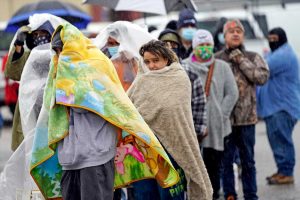 Jobless claims brings COVID total to nearly half US workforce

The 745,000 initial jobless claims filed last week brought the total for the COVID-19 pandemic to nearly 80.4 million — a number more than twice the size of California’s population.

The uptick likely had to do with the cold snap that caused widespread blackouts in Texas and other southern states, which may have caused the unexpected drop in jobless filings in the third week of February, experts say.

“Inclement weather and power outages affected large areas of the country and many Americans were not able to claim benefits in the previous week, but weather-related job losses may start showing in the claims data as early as this week,” Bloomberg economist Eliza Winger said.

Despite last week’s jump, the four-week moving average for new claims fell to 790,750 last week, offering another signal that employers and workers are slowly but surely recovering from the COVID lockdowns that swept the nation in December and January.

But last week marked the 50th straight in which jobless claims remained above the pre-pandemic record of 695,000, indicating the economy has yet to make it out of the woods nearly a year into the crisis.

The latest data came a day ahead of the feds’ closely watched employment report for February. Economists expect it to show non-farm payrolls adding 171,000 jobs last month, a significant increase from January’s meager gain of 49,000, according to Wrightson ICAP.