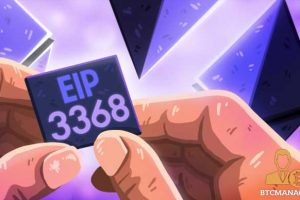 Ethereum developers have proposed the Ethereum Improvement Proposal (EIP) 3368, which aims to finally put miners and the development community on the same page, as regards the scheduled implementation of EIP 1559, a proposal that seeks to permanently solve the problem of skyrocketing gas fees.

Quelling the Tension with EIP-3368

On March 13, 2021, Tim Beiko, took to Twitter to reveal that EIP-3368, which he calls “miners counter-proposal” to EIP-1559, has been proposed. EIP-3368 aims to first increase block miners’ block reward from the current 2 ETH to 3 ETH, and gradually decrease it by each block until it crashes to 1 ETH per block over the next two years.

The team believes the EIP 3368 will greatly reduce the adverse effect of slashing miners’ profits, as it would give them enough time to sell off their mining machines, while also making it impossible for bad actors to orchestrate a 51 percent attack on the network.

“This approach offers a higher level of confidence and published schedule of yield while allowing mining participants time to gracefully repurpose/sell their hardware. This greatly increases ethereum’s PoW security by keeping incentives aligned to ethereum and not being force projected to the highest bidder,” the team wrote.

While Ethereum remains the number one network for smart contracts and decentralized application (dApps) development, the platform’s skyrocketing gas fees has made a good number of projects choose other blockchains in recent times.

In a bid to solve the network’s crazy gas fee issues, which has been greatly enriching miners, to the detriment of ether (ETH) investors, Vitalik Buterin introduced the EIP-1559 in 2018. Also known as the Ethereum fee burn proposal, EIP-1559 is designed to replace Ethereum’s current “first-price-auction,” fee mechanism, with the fixed-per-block” fee system.

This way, people will no longer need to add exorbitant transaction fees for their payments to get confirmed very fast.

A Show of Force

Notably, Ethereum miners have been kicking against the EIP-1559, as it would greatly slash their profits while enriching ETH hodlers by increasing scarcity via the burning of fees. With EIP-1559 scheduled to go live later in July, some key Ethereum mining pools still do not support the change and have threatened to orchestrate mayhem on the network on April 1, 2021.

Though the EIP-3338 seems to be having the desired effect on miners, as Red Panda Mining has said via Twitter that it will now “rescind from the show of force,” the proposal has however attracted mixed reactions from members of the Ethereum Magicians Forum.