Signs that an altseason is underway are beginning to increase across the cryptocurrency market after numerous altcoins posted double-digit gains on Aug. 31. Meanwhile, the price of Bitcoin (BTC) continued to face headwinds and the digital asset trades at $47,100.

The top altcoin Ether (ETH) looks poised to stage a 40% rally against BTC according to analysts, and a 5% gain in the ETH/BTC pair on Tuesday is thought to be the fuel behind altcoins which rallied more than 30% today. 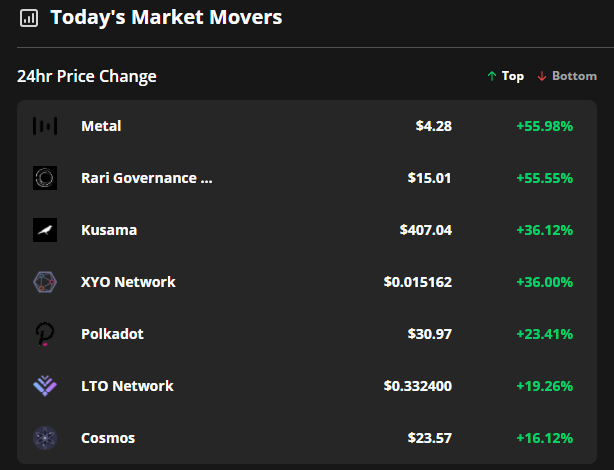 Data from Cointelegraph Markets Pro and TradingView shows that the biggest gainers over the past 24-hours were Metal (MTL), Rari Governance Token (RGT) and Kusama (KSM).

MTL, the top-performing token, is the native cryptocurrency of the Metal Pay platform which touts itself as “the easiest way to buy, sell and trade crypto.”

VORTECS(TM) data from Cointelegraph Markets Pro began to detect a bullish outlook for MTL on Aug. 27, prior to the recent price rise.

The VORTECS(TM) Score, exclusive to Cointelegraph, is an algorithmic comparison of historic and current market conditions derived from a combination of data points including market sentiment, trading volume, recent price movements and Twitter activity. 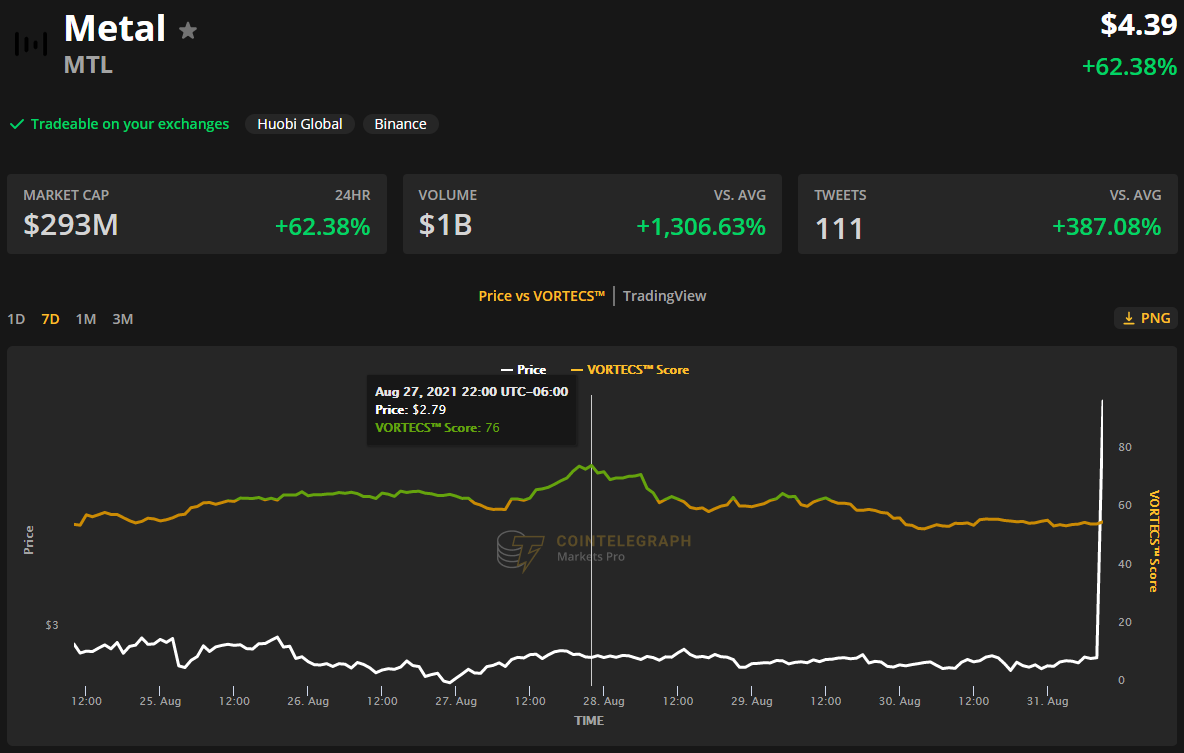 As seen in the chart above, the VORTECS(TM) Score for MTL first turned green on Aug. 25 and then proceeded to climb to a high of 76 on Aug. 27, around 82 hours before its price spiked by 98%.

The surge in momentum came following a Aug. 31 announcement that the project had received its money transmitter license for the U.S. state of Georgia, meaning residents in the state can now legally utilize services offered by Metal Pay.

The Rari Governance Token is the native token of Rari Capital, a non-custodial DeFi robo-advisor that allows users to deposit crypto-assets and automatically begin earning the highest yield.

According to data from Cointelegraph Markets Pro, market conditions for RGT have been favorable for some time. 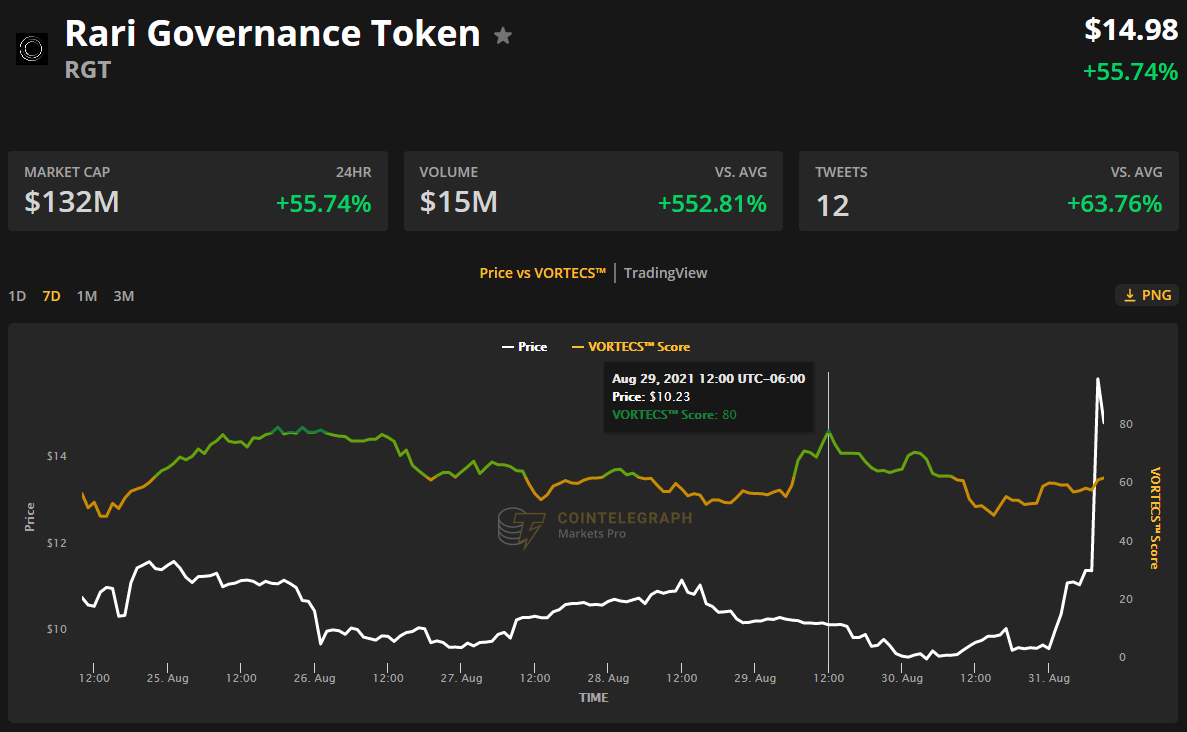 The VORTECS(TM) Score for RGT spiked into the green and reached a high of 80 on Aug. 29, around 36 hours before the price increased 59% over the next day.

The uptick in price and sentiment comes following the release of a governance proposal for the protocol that looks to create an NFTX Vault pool on Fuse.

Kusama rallies after integrating with Bifrost

Kusama is an experimental blockchain platform designed to facilitate interoperability between separate networks andit looks to bring a new level of scalability to the crypto ecosystem.

VORTECS(TM) data from Cointelegraph Markets Pro began to detect a bullish outlook for KSM on Aug. 30, prior to the recent price rise. 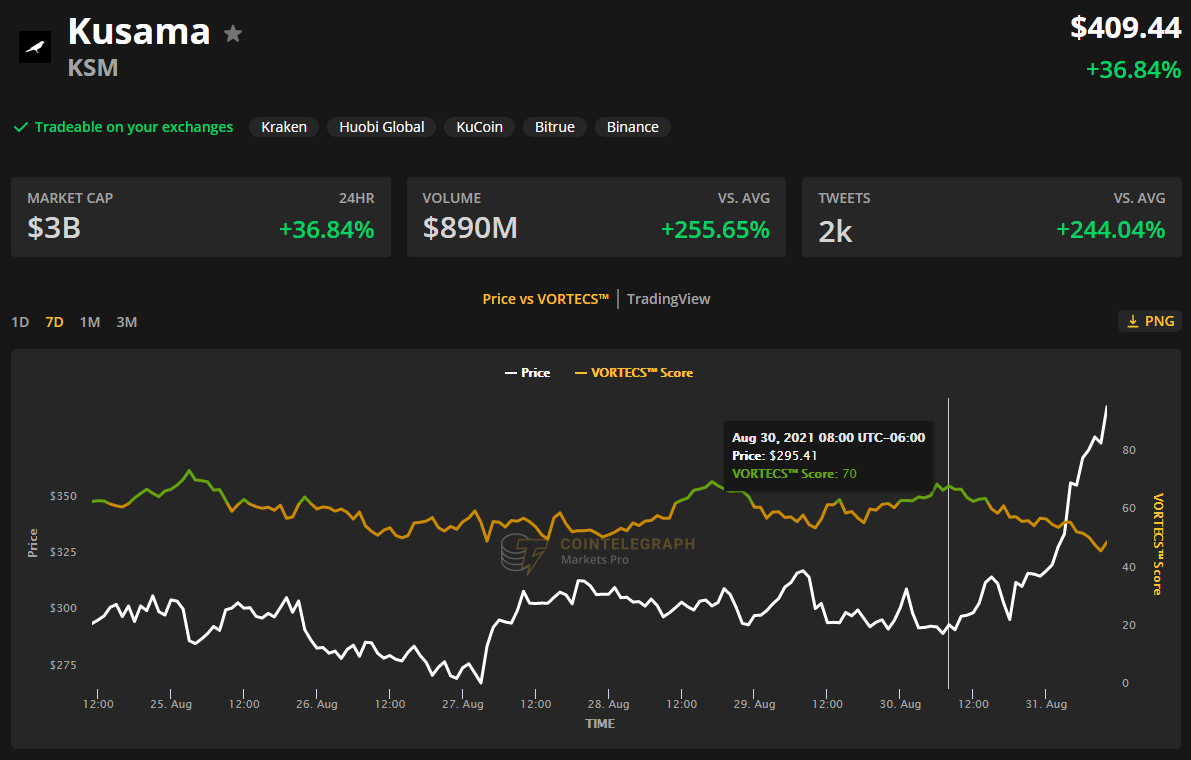 As seen in the chart above, the VORTECS(TM) Score for KSM climbed into the green zone on Aug. 30 and reached a high of 70, around 10 hours before its price began to increase by 45% over the next day.

The increase in interest for KSM comes on the heels of the release of an update that further integrated the token with Bifrost, a Polkadot-based parachain designed to provide liquidity and staking without nominating delays.