Top 3 Most Expensive NFTs Ever Sold 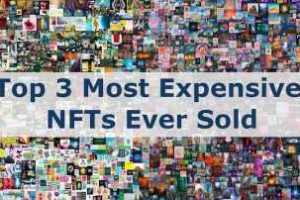 The NFT represents a collage of 5,000 of Beeple’s earlier artworks, demonstrating his development as an artist over the course of his career.

It was purchased by Vignesh “Metakovan” Sundaresan, who initially remained pseudonymous, but later revealed his identity, explaining that, “The point was to show Indians and people of color that they, too, could be patrons, that crypto was an equalizing power between the West and the Rest, and that the global south was rising.”

The second-highest bidder on the piece was none other than Tron CEO and founder Justin Sun, who bid a whopping $60.2 million before getting sniped at the last second by Sundaresan.

Dylan Field, the CEO of design software company Figma, is behind the sale of the second most expensive NFT in history—CryptoPunk #7804. The NFT sold for a cool 4,200 in 2018, at the time worth $7.5 million.

CryptoPunks are a randomly generated set of 10,000 unique digital characters, and are some of the first examples of non-fungible tokens released on the Ethereum blockchain.

Initially given away for free, some CryptoPunks with particularly rare or desirable features—such as the blue-skinned pipe-smoking alien that is CryptoPunk #7804—have gone on to sell for significant sums. This includes CryptoPunk #1651, which sold for a six-figure sum in February.

CROSSROAD is an NFT created by acclaimed digital artist Beeple. It features anti-Trump messaging, and an enlarged Donald Trump-like figure laying in a defeated heap with profanities written across his naked body. It didn’t always look like that, though; the artwork was designed to change based on the outcome of the 2020 election. Had Trump won, it would’ve depicted him wearing a crown and striding through flames.

Nifty Gateway, a popular marketplace for digital collectibles, brokered the $6.66 million sale of the NFT between its original owner (Twitter user Pablorfraile) and an anonymous buyer.

The NFT was sold just four months after it was initially purchased, at roughly 10x its original price.