VORTECS Report: When this indicator lights up, LUNA, MATIC and EGLD usually gain 10%

Consistency is not generally a hallmark of crypto asset price movements. In a market characterized by volatility, outliers often become the norm — while even macro analysis of large cap assets such as Bitcoin and Ether is often wide of the mark.

For cryptocurrencies with smaller market capitalizations, finding trading patterns can be even harder. But as the VORTECS Score(TM) from Cointelegraph Markets Pro continues to absorb the history of almost 200 digital assets, careful analysis of some crypto tokens demonstrates that patterns do exist: Even if they may be invisible to the human eye, the data doesn’t lie.

The data science team at Markets Pro and The TIE examined a number of cryptocurrencies that have regularly reached a VORTECS(TM) Score of over 80 since the quant algorithm was launched on January 3 2021.

A score of 80 generally indicates that the algorithm has reasonably high confidence that the combination of positive sentiment, price action, trading volume, and tweet volume that it currently sees in the market has historically led to increased prices for that particular asset over the next few days.

In the chart below, we can see assets that have hit that score on at least 20 days since launch, including AVAX, EGLD, VGX, MATIC, FTM, LUNA, AXS, AAVE, SAND and COTI. 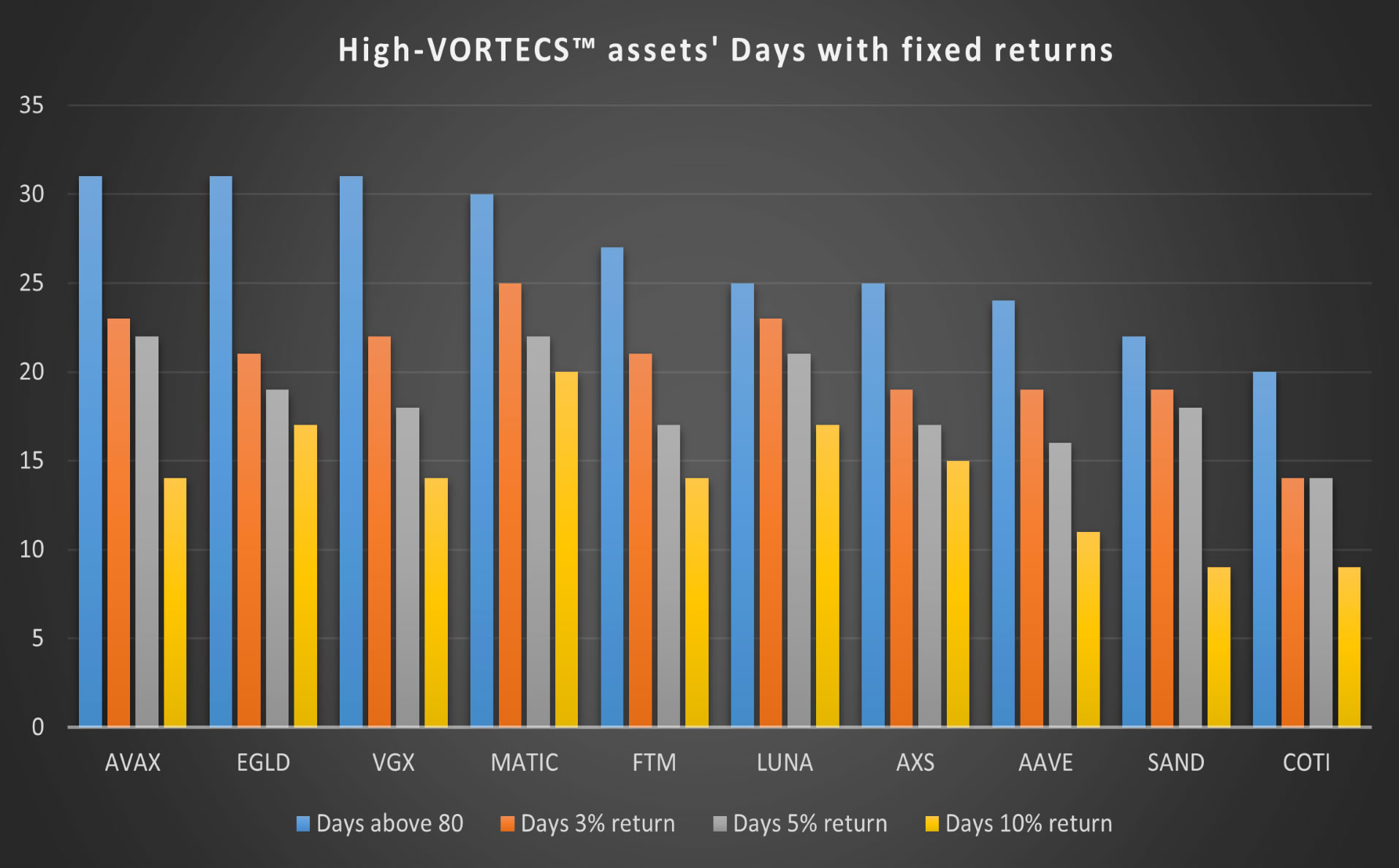 The blue bar illustrates the number of days on which the asset hit at least 80 — if the coin rose above 80 and then retreated below, before achieving the score again, only one per day was recorded; all subsequent hits in the next 24 hours were ignored.

Orange bars represent the number of occasions on which the asset then gained 3% in value over the subsequent 72 hours, while grey bars show a gain of 5% and yellow denotes a 10% gain.

LUNA boasts the most consistent gains of at least 3% following a VORTECS(TM) Score of 80, achieving that milestone 92% of the time:

Elrond (EGLD) also has a strong set of scores following an 80 score:

The Sandbox (SAND) stands out for highly consistent minor gains that didn’t translate into the same sort of 10% plus returns:

The VORTECS(TM) Score is an algorithmic metric derived from historical analysis of crypto markets.

For each one of the ~200 crypto assets supported by Cointelegraph Markets Pro, the algorithm is hunting for moments in time that resemble the current marketscape — 24 hours a day, 7 days a week.

Specifically, it’s looking for patterns that have consistently led to significant changes in price in the past.

Those patterns include a variety of factors: Volume, Outlook, RealPrice, Tweet Volume, Elevation, Confidence, and Sentiment… or VORTECS(TM) for short.

The algorithm combines all of this raw data into a VORTECS(TM) Score, which is designed to identify the general health of the market for a particular crypto asset. A high score suggests that in the past, conditions similar to those we see right now have often led to increases in the price of that asset. The higher the score, the more confident the algorithm is that these scenarios have been consistent.

Markets Pro has been tracking the return on investment (ROI) of Bitcoin, an evenly-weighted basket of the top 100 altcoins, and various automated VORTECS(TM)-based strategies since launching the algorithm on January 3 2021. A full methodology is available here.

While Bitcoin was trading just 8% higher than its price on January 3 at the time of writing, the altcoin basket had delivered 348% in returns. The top-performing VORTECS(TM) strategies have delivered outsized gains including several in excess of 1,000%, although the recent market pullback has meant that one strategy (buy at a score of 85, sell at 75) now trails Bitcoin’s returns. 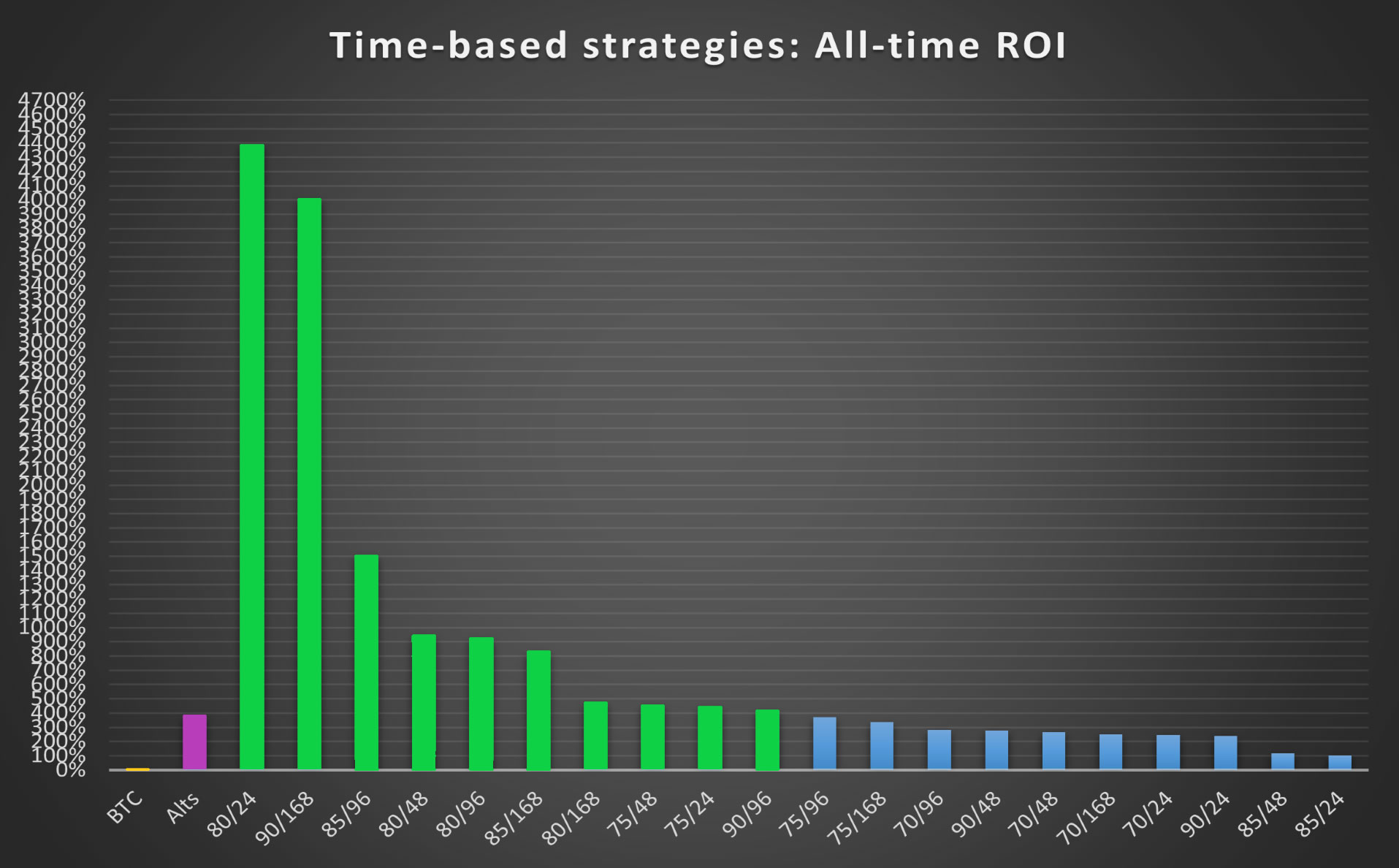 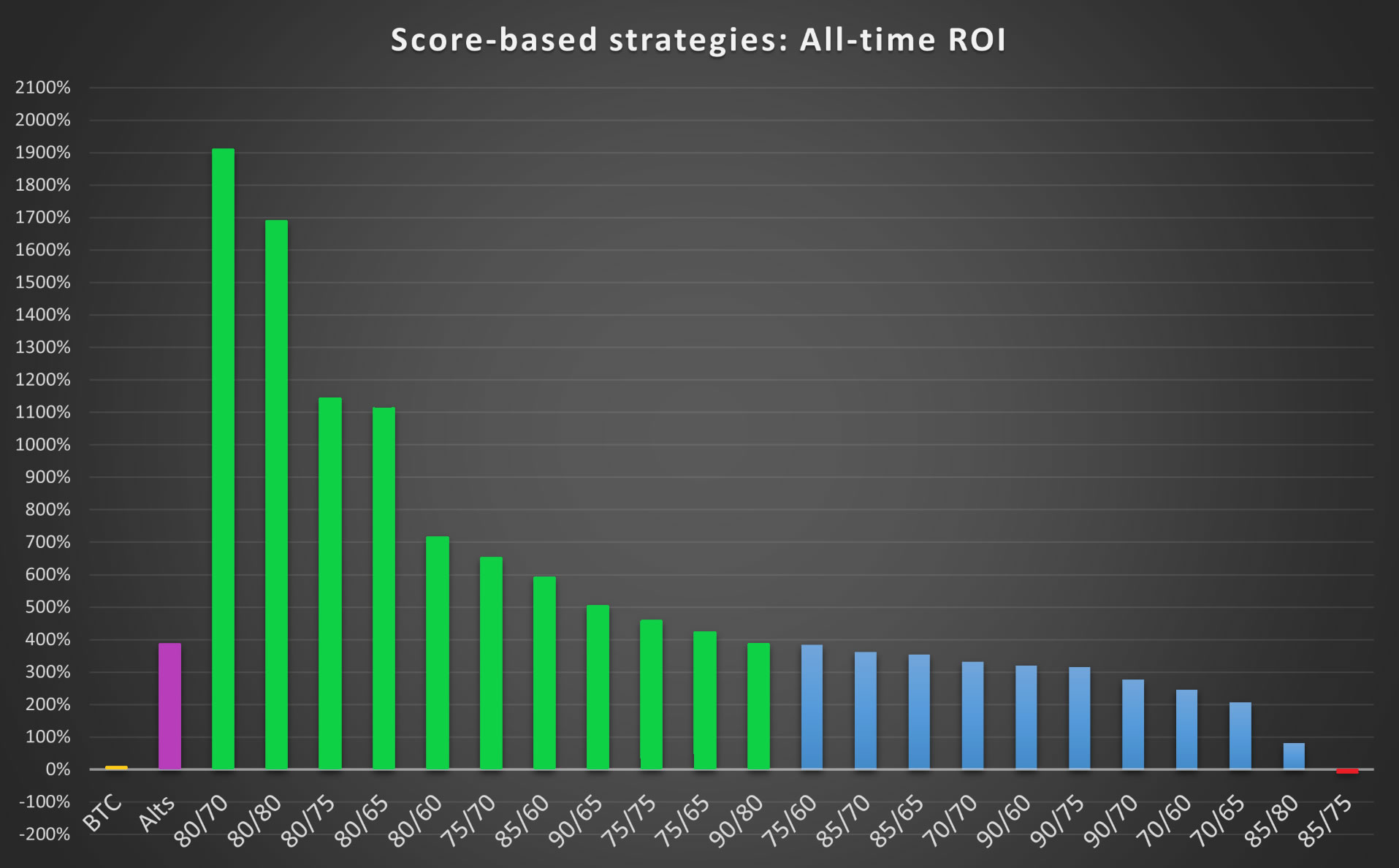 Cointelegraph Markets Pro is available exclusively to members on a monthly basis at $99 per month, or annually with two free months included. It carries a 14-day money-back policy, to ensure that it fits the crypto trading and investing research needs of subscribers, and members can cancel anytime.

Cointelegraph is a publisher of financial information, not an investment adviser. We do not provide personalized or individualized investment advice. Cryptocurrencies are volatile investments and carry significant risk including the risk of permanent and total loss. Past performance is not indicative of future results. Figures and charts are correct at the time of writing or as otherwise specified. Live-tested strategies are not recommendations. Consult your financial advisor before making financial decisions. Full terms and conditions.