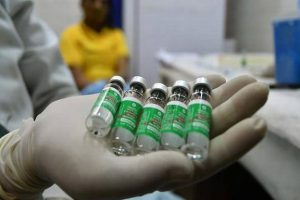 The Asian Development Bank has raised its forecast for India’s growth in 2021-22 to 11%, from 8% earlier, even as it warned that failure to control the resurgence of COVID-19 cases including April’s exponential jump poses a “considerable downside risk to the recovery”.

In its assessment based on end-March data, the ADB cited this year’s ‘more targeted’ containment measures compared with last year’s ‘large-scale’ national lockdown and said these would prove ‘less costly’ to the economy, which had seen a strong rebound in recent months’ economic indicators after last year’s ‘big recession’.

“A stimulus-fuelled surge in the U.S., India’s largest export market, will support the revival, but a severe second COVID-19 wave is threatening the recovery,” the lender said in its Asian Development Outlook report, projecting growth to moderate to 7% in 2022-23, after a 11% expansion this year. Government capex and accommodative financial policies, along with the vaccine roll-out programme this year, would also help, it added.

“Risks to the outlook tilt to the downside. The second wave of COVID-19 cases is worrying, especially if vaccine roll-out falters or fails to contain it. Another risk is a further tightening of global financial conditions, which would apply pressure on India’s market interest rates and therefore affect economic normalisation,” the ADB warned, adding that a likely pick-up in private investment could be dented as rising bad loans could discourage India’s banks from undertaking fresh lending.

The lender sees India’s average inflation rate slowing to 5.2% this year from 6.2% last fiscal, and reverting to 4.8% (recorded in 2019-20), over the succeeding 12 months. “Inflation is projected to moderate as good harvests and supply chain recovery contain domestic food inflation even as global food prices rise, though oil prices… may exert some inflationary pressure,” the ADB noted, adding that gasoline taxes had spurred fuel inflation last year even though oil prices had been low.

Yasuyuki Sawada, ADB chief economist, termed the pandemic’s sharp resurgence in India as one of the most important issues facing Asia. “Even with the current outbreak, growth will be high in large parts, because of last year’s big recession in India and the baseline effects. Vaccine roll-out is also on track to hit the target of 300 million by August and probably, can achieve a herd immunity by the (next) fiscal year,” he said.

“The projections are based on data and information up to March 31, so we were already aware… of the rise in cases,” said Abdul Abiad, ADB’s director for macroeconomic research. “Obviously, throughout the month of April, cases have risen exponentially and that really poses a downside risk. We need to monitor the situation closely; depending on how that evolves and the policies implemented to respond to that, we may have to revise our forecast in July.”