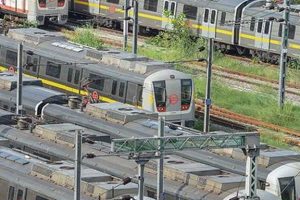 In the first-ever official development assistance (ODA) project in Andaman & Nicobar (A&N), Japan has approved grant aid worth ¥4.02 billion, or ₹265 crore, to improve the power supply in the islands, stressing the strategic geopolitical location of the islands for an open Indo-Pacific.

Japan has also extended yen loans worth ¥229.5 billion, or ₹16,186 crore, for executing four projects, including Delhi Metro’s Phase 4 and Bengaluru Metro’s Phase 2 expansion plans for which loan agreements were signed between the Japan International Cooperation Agency (JICA) and the government on Friday.

“This is the first-ever ODA project in the strategic islands of Andaman & Nicobar (apart from humanitarian emergency assistance),” said a Japanese embassy official.

“Due to its geopolitical location, the islands play a crucial role in our shared vision for a free, open and inclusive Indo-Pacific.”

“Cooperation between Japan and India on these crucial islands demonstrate the commitment of both countries to realising a stable, peaceful and prosperous Indo-Pacific,” he added.

The grant would be used to procure 15MWh batteries as well as power system stabilisers to allow better utilisation of solar power generated in South Andaman.

Similarly, a ₹3,717 crore loan has been approved for developing 80 km of metro lines under the Namma Metro’s second phase in Bengaluru. This would cover Line R6 (Nagawara – Gottigere, 22 km), Phase 2A (Silk Board – K R.Puram, about 20 km) and Phase 2B (K R.Puram – Kempegowda International Airport Terminal, 38 km).

A loan of ₹807 crore was extended for crop diversification in Himachal Pradesh and ₹3,272 crore in loans to rural water supply with a focus on mitigating fluorosis in Rajasthan’s Jhunjhunu and Barmer districts.