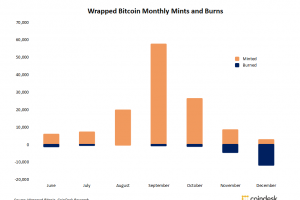 Traders are swapping their tokenized bitcoins for the real thing more than ever.