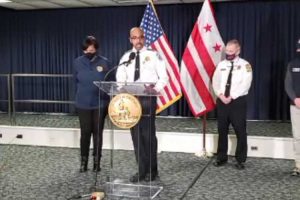 Four people are dead, 52 were arrested and at least 14 police officers injured after the violent riots at the U.S. Capitol on Wednesday.

"As of 9:30 [p.m.] today, we have made an excess of 52 arrests: four arrests for carrying pistols without licenses, one arrest for possession of prohibited weapon, 47 arrests related to curfew violations and unlawful entry," he said. "Twenty-six of these 52 arrests were made on U.S. Capitol ground."

"This number in addition to the 10 arrests that occurred yesterday are the arrests that the Metropolitan Police Department has reported thus far," he continued, noting that "these numbers are preliminary and will be updated accordingly."

"We have also recovered at least six firearms today in addition to the three last night," he said.

Never miss a story — sign up for PEOPLE's free daily newsletter to stay up-to-date on the best of what PEOPLE has to offer, from juicy celebrity news to compelling human interest stories.

Shocking Photos of the Violent Riots Occurring at the U.S. Capitol

The first person confirmed to have been shot and killed during the riot was identified as Ashli Babbitt by her husband Aaron, who spoke with KUSI News on Wednesday, and her mother-in-law, who also verified her identity to Fox 5 DC. Babbitt was a resident of the San Diego area and a veteran, as well as an outspoken supporter of Trump, according to her social media.

"One capitol police officer discharged his service weapon, striking an adult female. She was transported to a local hospital, where after all life-saving efforts failed, she was pronounced deceased," Chief Contee said Wednesday at the press conference. "The MPD's internal-affairs division is currently investigating this matter as we investigate all officer-involved deaths in the District of Columbia, including ones from other agencies. This is a tragic incident, and I send my condolences to the victim's family and friends."

"Additionally, there were three other deaths reported today from the area around the Capitol grounds," he continued. "One of adult female and two adult males appear to have suffered from separate medical emergencies which resulted in their deaths. Any loss of life in the District is tragic, and our thoughts are with anyone impacted by their loss."

Chief Contee went on to say that "at least 14 MPD officers have sustained injuries during the demonstrations," with one having "suffered serious injuries after he was pulled into a crowd and assaulted."

"He is currently hospitalized and undergoing testing for treatment for his injuries," he added. "One officer received significant facial injuries from being struck by a projectile and is also hospitalized. The additional injuries are not as serious in nature, but are nonetheless concerning." Thousands of President Donald Trump's supporters gathered outside in D.C. on Wednesday and moved from the Mall to the Capitol, forcing their way into the building. Motivated by the president, the rioters stormed the Capitol and were photographed scaling the building's walls, breaking windows, roaming through the building, looting and vandalizing, including in congressional chambers and lawmaker offices. Rioters also ripped an American flag off of a flagpole outside the Capitol building and replaced it with a Trump flag.

The massive mob in turn delayed the counting of the electoral votes cast in the 2020 presidential election, as lawyers were forced to evacuate the Capitol.

Washington D.C.'s and Virginia's National Guards were activated to respond to the chaos, and Mayor Bowser issued a curfew beginning at 6 p.m.

President-elect Joe Biden called for an end to the violence amid the chaos on Wednesday, imploring the 45th president to call his supporters off by saying in part, "President Trump, step up." Throughout the day, lawmakers on both sides of the aisle condemned the rioters' violence, and former presidents Jimmy Carter, George W. Bush, Bill Clinton and Barack Obama  all spoke out.

The president, 74, tweeted a video to the rioters, saying, "We love you, you're very special," and doubling down on the baseless claims that the election was "stolen from us" in the clip before adding, "We have to have peace, so go home."

As of Thursday morning, Trump has officially agreed to an an "orderly" transition on Jan. 20, making way for Biden, 78, to be named the 46th president of the United States following Congress' affirmation of his victory Wednesday night.

The Overregulation of Stablecoins