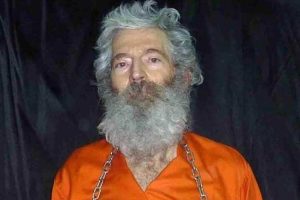 The investigation into whether Rep. Matt Gaetz committed sex trafficking has become tangled with a head-spinning claim about an overseas rescue mission for a missing spy after the embattled Florida lawmaker insisted his family was actually the target of an extortion plot.

Gaetz, 38, adamantly denied the allegations against him after The New York Times, the Associated Press and other outlets reported that federal law enforcement has been investigating whether he trafficked women and girls, including a 17-year-old, by paying them or exchanging material goods for sex.

Gaetz has not been charged. Federal officials have not commented publicly.

In pushing back on the claims against him, Gaetz has made unusual accusations of his own — saying two men tried to extort his family for $25 million in order to fund the rescue of a presumed-dead former FBI agent believed to be long held captive by Iran.

One of the men Gaetz says was involved in the attempted extortion told The Washington Post that the lawmaker's allegation was "a blatant attempt to distract from the fact that he's under investigation for sex trafficking of minors."

The other man Gaetz named said in a radio interview that while he did ask for money, it was not as part of a blackmail scheme.

Here's what to know about this very unusual part of the case.

What Is Matt Gaetz Claiming About Extortion?

Gaetz has been a Florida Panhandle representative since 2017 and he built a profile in recent years as a staunch support of former President Donald Trump (with a similar penchant for provocation).

He says he and dad Don Gaetz, a former state lawmaker who is a prominent Florida political figure in his own right, were recently approached by two men: David McGee, a former federal prosecutor who now works as an attorney in Florida, and Bob Kent, a former Air Force intelligence officer.

Gaetz alleges Kent and McGee were behind the $25 million plot.

He reportedly gave screenshots, an email and other documents to The Washington Examiner that he said supports his claim that his family was being extorted.

Among these is a message Gaetz's father said he received on March 16 from Kent suggesting "a plan that can make [Matt Gaetz's] future legal and political problems go away," the Examiner reported. Kent has said the overture was not an attempt at extortion.

The paper also described a three-page "Project Homecoming" outline Kent allegedly gave to Gaetz's dad on March 17 which said Gaetz was "under investigation by the FBI for various public corruption and public integrity issues."

The Examiner also reported on an email it said showed the Gaetz family was working with the FBI in examining the matter.

"My client, Don Gaetz, was approached by two individuals to make a sizable payment in what I would call a scheme to defraud," Don's attorney wrote to the Department of Justice on March 25, according to the Examiner. "The FBI is not asking Don to voluntarily and proactively assist in their investigation, which Don is willing to do. Please confirm that your Office and the FBI would like Don's assistance in this matter and that he will be working at the Government's request."

A federal prosecutor replied to "confirm that your client is working with my office as well as the FBI at the government's request in order to determine if a federal crime has been committed. This has been discussed with, and approved by, the FBI as well as the leadership of my office and components of Main Justice." According to the texts and documents that Rep. Gaetz reportedly provided, the $25 million was purportedly to fund a rescue mission to find former U.S. intelligence officer Robert Levinson.

The Post reported that Levinson, who had retired from the FBI, "disappeared under murky circumstances in March 2007." He had been on Kish Island, a tiny resort destination off the southern coast of Iran.

Levinson was there as part of an "unauthorized trip for the CIA to gather intelligence on Iran's nuclear program," according to the Post.

The U.S. government, which long lobbied for answers, now believes that Levinson — the country's longest-held Iranian hostage — died in captivity sometime prior to March 2020. McGee, a friend of Levinson's, has worked as the family's attorney.

Iran has denied any involvement.

Levinson, who would be 72 years old, was presumed dead by the Trump administration last spring, according to a New York Times report.

Both the Obama and Trump administrations reportedly made efforts to bring Levinson home, to no avail.

Barry Meier, a Times reporter, wrote a book on Levinson's disappearance and the wide array of people who have attempted to track him down over the years.

"For years, there's been a steady parade of well-meaning, crazy and even corrupt people who have tried to help the Levinson family or tried to use Bob's case to help themselves," Meier, the author of Missing Man: The American Spy Who Vanished in Iran, told Newsweek in 2019. "It's enough to make your head spin." Levinson's family wrote on Facebook last March they had reviewed information that "led both [the federal government] and us to conclude that our wonderful husband and father died while in Iranian custody" sometime before the COVID-19 pandemic.

"His body has not yet been returned to us for a proper burial," his family wrote. "We don't even know when, or even if, his body would be returned to us."

But Gaetz is now claiming Kent and McGee approached his family about funding a rescue mission for the agent, believing he was somehow still alive.

McGee's law firm, Beggs & Lane, told PEOPLE in a statement that Gaetz's claims about him are both "false and defamatory."

"While he was with the DOJ he would never have entertained a scheme such as what Congressman Gaetz suggests nor would he today," McGee's firm said. "Unsubstantiated allegations do not change that fact."

How Is This Involved with Matt Gaetz’s Case?

It's not clear how Kent or McGee would have known about the FBI's investigation into Gaetz's supposed sex crimes, which was not made public until a Times report last week.

Kent, the former Air Force intelligence officer, told SiriusXM on Monday that he did ask Gaetz's father for $25 million but that it was not an extortion attempt.

Rather, Kent said, he told Gaetz's father if he and his son did not agree to the plan, then the family would simply never hear from Kent about it again.

"I didn't have any details about his son [Rep. Gaetz]," Kent later told CNN. "I stopped him immediately and explained that this was not an extortion attempt. I said this was a legitimate offer to help rescue Robert Levinson." Don Gaetz, the lawmaker's father, told Politico last week that he had worn a wire in assisting an FBI investigation into the alleged extortion plot.

Rep. Gaetz's office did not respond to PEOPLE's request for comment.

The Department of Justice declined to comment when PEOPLE asked to confirm whether there was an extortion investigation.

Kent separately told CNN host Chris Cuomo he did meet with FBI officials to discuss the meeting with Gaetz's father.

He also said he believes Levinson is still alive and that an independent rescue mission he helped orchestrate last July "fell apart."

"If the allegations are true, [Rep. Gaetz] is in need of some good will from the government," Kent told CNN. "I'm in need of a sponsor to fund the rescue project."